Why Corbyn could stay if Labour lose – part 1 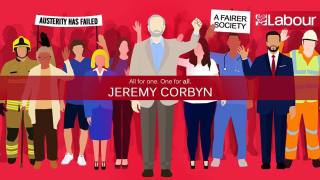 The general consensus is that Jeremy Corbyn will resign as Labour Leader on June 9th. Some in the Labour Party even welcomed the calling of this election as ‘the nightmare will be over quicker’. I’m not so sure. I think catastrophic defeat could even strengthen  the left of the party, and Corbyn could stay on, making way for a younger version when they are ready, and Labour will contest the 2022 election on the back of an even more radical programme.

The reasons for this are both simple and complicated. I will write about the complicated reason tomorrow, but the simple one is that that  Jeremy Corbyn has not had time to update Labour’s policies to those that the members that voted him in to the leadership twice would like. Labour has a process, involving the National Executive Committee and numerous policy forums, that was going to be worked through over the next three conference seasons (2017, 2018 and 2019) ready for the 2020 election. That hasn’t happened. So the programme on which Labour will stand will not be the one that Jeremy Corbyn truly wants. So he and his supporters will feel they need extra time to produce the manifesto and policy programme that they really voted him in to produce.

The Labour constitution is most well known for Clause IV, which used to call for nationalisation of the means of production but was updated in 1995 by Tony Blair. A lesser known clause of the constitution (a bit like being a member of the Supremes but not Diana Ross) is Clause V, which is about creating the policy programme. Towards the end of it is this:

“When not in Government the NEC, the Shadow Cabinet, the Parliamentary Committee of the Parliamentary Labour Party (‘PLP’) and the Chair and three vice Chairs of the NPF shall decide which items from the party programme shall be included in the manifesto that shall be issued by the NEC prior to every general election. The joint meeting shall also define the attitude of the party to the principal issues raised by the election which are not covered by the manifesto.”

During the times when the party was in ideological turmoil, particularly the 1970s and 1980s, Tony Benn attempted to ‘democratize’ this process so that the policy programme could be moved to where he thought the membership wanted it to go (remember, the membership of every party tends to be further to the left (Labour) or right (Conservatives) of their voters). Jeremy Corbyn (a close friend of Benn’s) has suggested that the policy programme could instead be subject to online voting, bypassing the processes in Clause V.

This might have been achieved had Corbyn had time. But he didn’t, because of this snap election. So the manifesto will have to include many current Labour Party policy positions – for instance on retaining Trident – that Corbyn doesn’t agree with, which could bring chaos once published as journalists will drive a hole between the manifesto and the leader.

After the election, the claim could be that the election didn’t give Corbyn the chance to present a proper Corbyn manifesto to the electorate, so he should be given time to change the policy programme and manifesto, ready for 2022, by which time he will probably not be in place, but a suitable replacement will be. In the absence of an obvious suitable and ready replacement, Corbyn has to hang on for a while.

There is even an argument that a crushing defeat could help the Corbyn left of the party. Safe seats tend to be held by those on the left, and marginal seats by moderates. So being reduced to a ‘rump’ of MPs in the middle to high 100s will mean a higher proportion of MPs are of the left and it is easier to get the nominations of 20% of Labour MPs and MEPs needed to stand. So instead of needing to borrow nominations of moderate MPs to ‘widen the debate’ (as happened in 2015 when Corbyn was immediately nominated), a hard-left candidate will always be present. Under the current one-member-one-vote rules, a membership far to the left of the electorate will always vote for that candidate.

Which comes back to the likelihood that Corbyn won’t resign if Labour lose. He and his supporters could argue that he doesn’t ‘own’ that defeat because it was on a Miliband/Blairite policy platform, not his own. Polling of his policies suggests they are popular, and Corbynites think he is only not popular because of mainstream media bias. Once that is ‘fixed’ Labour will win.

What do you think?