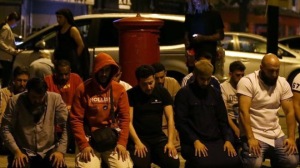 It was a terrorist incident at Finsbury Park mosque. Put aside some news organisations’ insistence in calling it a ‘white van man’ or a ’48 year old white man’. Darren Osborne is a terrorist.

He is a terrorist because the definition of one involves making people fear going about their daily lives doing normal things. Such as, in this instance, praying.

He also plainly doesn’t understand how jihad works, because he has done exactly what radical Islamists want, which is for people like him to commit acts like this which drive communities apart and justify retaliation.

That said, Darren Osborne will probably argue that he was provoked. He will argue that because he is still alive. This despite driving his van into a group of Muslims who were at the time tending to an elderly gentleman who had collapsed ill (and has since died), then getting out, shouting ‘I want to kill Muslims’. Helped by the fact that he had decided to do this whilst completely unarmed, he was tackled to the ground and then, on the instruction of the Imam, protected, unharmed, until the police came within minutes,

Whilst I let that sink in for a minute, let’s consider what caused him to carry out this act. JK Rowling has decided that Nigel Farage’s breaking point poster and Katie Hopkins’ behaviour after the Manchester bomb was what radicalised Darren Osborne.

By the same token, of course I could argue that Jeremy Corbyn’s insistence that British foreign policy causes terrorism radicalised the Islamists who carried out the Westminster, Manchester and London Bridge attacks. But I won’t, because it is just isn’t true.

Two of those attacks involved Islamists driving a van into crowds of people, then getting out and attacking people. Osborne did the first bit, but apparently decided against doing the second part, as he was actually unarmed and surrounded by quite a few large men. In Osborne’s head, I have little doubt, was the idea of an eye for an eye. Thankfully the whole world isn’t blind.

By the way, just in case it didn’t click, Darren Osborne is still alive because Islam is a religion of peace.

The 2,227 votes that are why Labour are pushing for another election »
« Explaining the direct line from ‘contracting out’ to the Grenfell Tower disaster