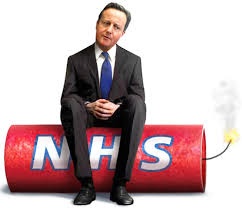 David Cameron, in the run-up to the 2010 General Election, said that his priorities could be summed up in three letters “N-H-S”. One of the main planks of the strategy to show the Tories’ caring sharing side were some posters with Cameron’s most earnest and determined faces saying “I’ll cut the deficit, not the NHS”. Here we are with one year before the election and I have some figures for you that suggest that over the next few months, if Labour play it right, the fate of the NHS in the hands of the coalition these past four years could be a considerable stick to beat them with.

Here we go with 10 statistics to back this up:

1) In April the number of people waiting more than 18 weeks for an operation hit three million, which is a six-year high

3) This month figures showed that patients waiting longer than six weeks for tests had doubled to 16,981, the highest since 2008

4) Two weeks ago the number of people who attended A&E units reached a record number – 297,527 – which is a sign that other parts of the system are creaking; A&E visits rise when patients are struggling to get GP appoinments or the elderly are lacking care at home.

7) The Royal College of Surgeons have said that the problems are spreading through the system, with more and more beds taken up by emergency patients, meaning non-urgent treatments are being postponed.

9) The average wait for an operation is 9.9 weeks, compared with 9.2 at the last election

The NHS has also not been looking after money well. One in three hospital trusts are now in deficit and many think they won’t be balancing their books this and next year. The Department of Health, in response, has identified £2 billion of ‘inefficiencies’ that could be ironed out – wanting more bulk buying, selling off of land and improving staff contracts. Savings of millions have been identified for buying the cheapest surgical gloves, buying non-branded drugs and reducing the number of temporary doctors and nurses.

This sounds good, but the government has just wasted over £3 billion on a structural reorganization that was a a distraction from the real problems in the NHS – in which they have managed to replace 160 primary trusts and regional health authorities with 440 organisations – each employing a whole new layer of bureaucrats.

We have ended up with a situation where Lynton Crosby, the Tories’ director of strategy, is instructing Conservative MPs to keep quiet about health in the next year and talk more about welfare and education.

Things will get worse with the release of a “state of the NHS” study by the Labour Party next month. It will also not be helped by the election of Dr Sarah Wollaston as chair of the commons health select committee (click here to read about that). But the worst case scenario will be a cold winter, because it sound like the NHS won’t be able to cope with that, and you can expect pictures of patients on trolleys in corridors to mount up very quickly.

This is the problem with David Cameron’s pledge to make “N-H-S” his priority. If this is what happens to something that is his priority – what else has been going on during his tenure? A well-organised Labour Party would have some fruitful rocks to look under.

Without Andy Coulson we would probably be in our 17th year of Labour government »
« EU must be joking?