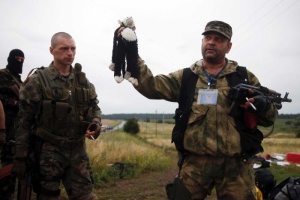 There are two explanations for the missile being fired that shot down Malaysian Airlines flight MH17 on Thursday. One is that separatist rebels in the East of Ukraine wanted to draw the rest of the world into their battle by using an outrageous piece of terrorism which left no option but an aggressive response. The second explanation is that it was a terrible mistake by a group of fighters who were not trained enough to successfully use the weaponry they had been supplied with, one which was the last thing they would have wanted to happen. World peace dictates that we probably need to believe the second explanation.

The problem is that if it was indeed a terrible mistake, then the international community needs to find out exactly what happened and put all safeguards in place to make sure that it never happens again. The starting point for that is for those who carried it out to hold up their hands and admit it. By ‘those who carried it out’ I don’t mean just those who actually, physically launched the missile (who I would suspect might have been ‘disappeared’ by now, along with the missile launcher), but those in charge of the fighters, and those who are supplying them. This is why Vladimir Putin is under considerable pressure at the moment.

All available evidence points to it having been the ‘Pro-Russian’ separatists who fired the missile. We have a satellite picture of the alleged missile launcher, we have tweets (since deleted) from the their General claiming that now we should learn what happens to those who enter ‘their’ airspace, we have intercepted telephone conversations from those in the field to those in charge as it became clear that they had shot down a civilian aircraft. We know that the Ukranian army don’t possess similar ground to air missiles, as the rebels don’t possess aircraft. We also know that properly trained military personnel, be they from the Ukranian or Russian army, would have been able to tell the difference between an enemy aircraft and a civilian aircraft, so it is likely to have been carried out by inexperienced hands.

What we don’t have, and Putin knows this, is a ‘smoking gun’, which is incontrovertible proof that the plane was shot down by a missile fired from the Russian supplied missile launcher. This is not helped by the inability of independent observers to gain full access to the site of the crash, which may or may not be related to the fact that we haven’t found any of the ‘black boxes’ which may tell us what happened, and also are having problems finding the pieces of debris which would provide evidence of what type of missile brought the plane down. They can’t gain full access because the site is being ‘guarded’ by the same group accused of shooting the plane down. It would not surprise anyone if any useful evidence was currently over the border in Russia being destroyed. The international community could only get unfettered access to the site by fighting eugenie way in at the moment, and that isn’t going to happen.

What Vladimir Putin could do, and could have done already, is to have told the separatists that they need to leave the crash site alone. It is the scene of a crime, whether it was an accident or not. But Putin is still denying he has anything to do with them. He is still suggesting the plane being brought down was the responsibility of the Ukraine government as it was in their airspace. He is still denying that these separatists having access to military equipment that could only be afforded by and supplied by a state as large as Russia has anything to do with Russia.

How do we get Putin to act responsibly? Well, everyone is discussing sanctions, but we must remember that Putin won’t feel the effects of sanctions. Sanctions affect the poor of Russia, of which there are many, and not people like Putin, who is rumoured to have made himself extremely rich during his 15 years in power. So we are at an impasse, but I wonder whether the death of so many innocent people might be the straw that breaks this obstinate camel’s back? How much blood does he really want to have on his hands? How much hatred does he want to stir within the world’s community? Is he so insulated from world opinion that he still thinks what he has done is good for Russia? Hopefully, this week we’ll find the answers to those questions. I won’t be holding my breath though