Ed Miliband’s greatest achievement – we still have one Labour Party 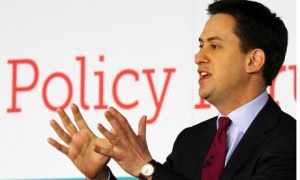 Ed Miliband’s greatest achievement as the leader of an opposition party that was just battered at a General Election has been to keep his party united in a way few others could have done. His personal charm and honesty seems to have meant that although there have always been grumbles about his leadership from people who were concerned about his Prime Ministerial bearing, there are few who are complaining about his performance in opposition. No better example of that has come last weekend at the National Policy Forum (NPF).

If you hadn’t heard that last weekend there was a National Policy Forum, at which many of the policies that will form the basis of the manifesto at the next election were agreed, then that is exactly my point. They somehow got through a weekend in Milton Keynes without a major falling out. This has led to journalists agreeing two things: Firstly that the party seems to not be full of ‘mad’ people attempting to haul it so far left that it makes itself completely unelectable. Secondly that the party as a whole doesn’t think that its leadership is going to betray them. The latter is particularly poignant in a week in which Tony Blair celebrated the 20th anniversary of his election as leader by reminding everyone how far he was prepared to bend the Labour Party to win.

The main rebellion of the weekend was one vote that was to set the party in a course against austerity. The idea that Labour can win the next election whilst promising a return to massive public spending was rejected. Whilst the leadership does have a belief in a ‘big state’. They understand that the electorate has been convinced that they overspent during their time in power, were a cause of the deficit being so high before the recession struck, and therefore need to show they are capable of fiscal discipline before being trusted with the keys to the economy again. Hence the promises to clear the deficit by the end of the next Parliament in 2020, which is two years later than George Osborne has promised, but is a key difference. It allows breathing space to do what Labour says is the key differentiator between them and Conservatives..they will have to make cuts, but they can do it with halves, and with a fairer distribution of the pain and the gain.

What came out of there was a group of policies that looks to address some major systemic and market failures that are slowing down our emergence from deficit and debt. So they can build a million homes, as the increase in housing supply can lower property prices and make sure those in need can be housed too. They can try and achieve a new deal on rail ownership, so we don’t continue a situation in which it costs £11 to travel 30 miles in France but £25 in the Uk and the subsidy paid to rail operators has trebled since privatisation despite them being able to pay dividends. They can try and legislate for a higher (living?) minimum wage, so that we could save about £2 billion a year that we pay in benefits to people who have jobs on such low pay that they can barely live. We could increase devolution to towns and cities, so that policies are not relevant to local issues that should be prioritised. There is also the work to be done on the energy market, in which prices may be regulated and other protections for consumers introduced, and the housing rental market, where people need to have more security with their shelter from rapacious landlords. It is a list that makes sense, costs little, but could make a great difference.

I still wouldn’t be surprised if the 2015 Labour manifesto includes a commitment to renationalise all of the rail franchises as they become available, because you cannot introduce ‘competition’ on a natural monopoly. I also think we shouldn’t underestimate the fact that whilst the 1997 Labour government had been out of power since 1979, and the 2010 Conservatives since 1997, it has only been 5 years since Labour were out of power, so they might now where the skeletons are and where real savings and efficiencies can be made and thus be able to make more concrete commitments in that direction.

Let’s not forget, of course, that they only need 35% of the vote to win a majority. Miliband may not make a great a Prime Minister, but 4 years after only winning 229 seats, Labour in opposition look healthier, and more united than many realise.