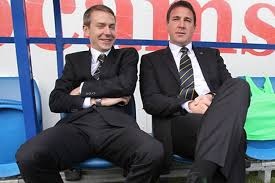 Reading the League Managers’ Association’s (LMA) ridiculous explanation for the content of the alleged texts and emails between Malky Mackay, the ex-Cardiff manager, and Iain Moody, the now ex-director of football operations at Crystal Palace, whilst they were at Cardiff together, I was reminded just how far the word ‘banter’ has come in its reasonably short life. Now might be the time to turn the word around and help it reverse back to where it should belong.

Those of you who don’t know what I am talking about can read here. It is important to note that whilst Moody has resigned his post, an indication that there is some substance to these allegations, Mackay has at the moment only admitted to two of the the. But it was what how the LMA defended him that passed into the realms of almost surreality.

“These were two text messages sent in private at a time Malky felt under great pressure and when he was letting off steam to a friend during some friendly text message banter.”

There are so many things wrong with this sentence, for which the LMA has since apologised, and for which the press officer or whoever wrote the statement has probably received what I at least would imagine are some admonishing stares.

Firstly, it doesn’t matter whether it was in private or in public. In fact, it is even more relevant that these were in private as it makes you wonder what else went on in private communications between these two men. If they thought these were ‘in private’ then it’s probably worse, because this must how these two men truly think. But there is also the stupidity of this happening over text or email. It was knocked into me from my first day at work at Price Waterhouse in 1996 (and I tell my pupils too) anything I put on a text or email will stay with me for the rest of my life and I had better be able to justify it should anyone I write about end up reading It back to me, or if for any reason they get published.

Then there is the line about the pressure and stress Mackay was apparently under. I feel under pressure and stress sometimes, but it doesn’t make me do things or say things of write things or even think things that Mackay has been reported as doing. It reminds me of a rather wonderful article written by a columnist after Mel Gibson’s anti-Semitic rant back in 2006 when he was stopped by the police and was under the influence of alcohol. Gibson had explained that he wasn’t actually anti-Semitic but his lords were caused by the alcohol. The columnist I am thinking about wrote that he decided to test this out by imbibing two full bottles of wine and was surprised to find himself no more anti-Semitic than when he started drinking. In fact, he commented, if anything he felt more positively toward them, as well as towards all of mankind. My point is that stress and pressure wasn’t the cause of what Mackay and Moody allegedly wrote. It is, instead, the language they use with each other.

Simple question, would Malky Mackay and Iain Moody have said what they allegedly wrote to whom they wrote about face to face? No they wouldn’t, so it is not banter. I would be happy to bet that Mackay and Moody, long time friends and colleagues who worked with each other at both Cardiff and Watford, have plenty of banter between them. This wasn’t it.

Talking of Watford, I am a lifelong fan. Malky Mackay was at the club from 2005 to 2011 as player, coach and manager. I met him on quite a few occasions. He was at all times a friendly, talkative, interesting man who on the surface treated everyone he came across with respect, from the fan in the street all the way up to his Chairman. For many fans of the club, the last few days have been difficult, because someone we respected has been revealed as some on we respect a lot less.

I would personally hope that he gets to work in football again, because I don’t believe someone should lose their livelihood because of their privately held opinions (assuming, and there is no proof this, his views didn’t feed through to how he treated people). That idea, that if you think something or say something unacceptable you should not be able to work, is an illiberal stain on our society that we should be really very careful about.

What Mackay has done is wrong, is not banter, and he deserves some of the opprobrium he is receiving now. I also think the exposure of these texts will, in the long term, be good for football, as some of the more neanderthal element of it, and society in general, will learn once again that their out-dated views are not acceptable in our multicultural, equal society. At least, I hope a Malky Mackay will have learned tag at lesson.

Hamas signing up to the ICC makes sense if you view it as suicide bombing by legal means »
« How strong is the case for nationalising the mobile phone companies?