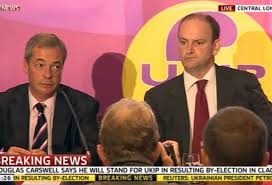 Douglas Carswell is a rare political animal, in that he isn’t a political animal at all. He had a career (albeit short) for 10 years outside politics before entering it in 2001. Once in politics, he has never shown any interest in climbing the greasy pole to ministerial positions, preferring to campaign as a back bench MP on issues that mean a lot to him. The motivation for these is set out in his book ‘The End of Politics and the Birth of iDemocracy‘, in which he made it clear that he  feels politicians must rid themselves of any barriers between them and the electorate. He also sets out the problems of a political class that mainly talks to itself.

Actions he has taken on this them have included a successful campaign to unseat Michael Martin, the Commons speaker, in 2008, on the basis of his opposition to reforms in areas like expenses, a campaign to increase the electorate’s right to recall MPs (remove them, triggering a by-election) who break the law, and most significantly, a campaign to remove the UK from the European Union. It was the latter which he cited as his main reason for defecting to UKIP this week, and putting himself up for re-election in his Clacton-on-sea constituency.

Ignore any attempts to downplay the significance of this move by the Tory party, this could fundamentally reshape British politics if it goes in the direction that UKIP leader Nigel Farage and his main financial backer Stuart Wheeler hope it will go. It is quite possible a new party of the right will emerge, with a significant amount of Commons seats held by current UKIP candidates and the more right leaning Conservative MPs, there will be a centrist party of One-Nation Tories, Blairite Labour MPs, and Orange Book Lib Dems, and a left-wing ‘progressive’ party of the more left wing Lib Dems and Labour politicians.

Why do i think this? Because if you listen carefully to what Douglas Carswell has been saying, there are a group of politicians in the Conservative party who believe that David Cameron could come back having won enough concessions from his negotiations with the EU should the Conservatives get back into government to win the referendum in 2017, and that, to these right-leaning politicians will not be enough. They will only be happy if the UK leaves the EU, and their concern is that the referendum result will keep Britain in.

What I am saying is that there are a group of Conservative MPs who have decided that they would like David Cameron’s Conservative party to lose the 2015 general election. They think that if Ed Miliband gets in there won’t be a referendum, which means that the issue will not be put to bed for the 30-40 years that it would be if it were held and the UK stayed in. Which means that they can keep banging on about Europe and then campaign in 2020 within a new political landscape with the reshaping of the parties I have talked about above and get into a position of serious power and influence and THEN have the referendum. Let’s face it, if Douglas Carswell wanted a referendum in 2017 he would have stayed in the Conservative party because they are the only party that has said they will hold one if the hey won and he would definitely have held his seat which would have helped them do that.

So in summary I don’t think Douglas Carswell will be the first to defect. I think he will win the by-election he has called comfortably, because the demographics of Clacton make it an even more UKIPpy place than South Thanet where Farage is standing. Some Tory MPs will see that happen and look at their local polling and realise firstly that if they don’t switch to UKIP they might get beaten by UKIP but also that their chances of achieving what they want (leaving the EU) will be better served by fighting the next election as UKIP candidates. By the way, I wouldn’t be surprised also if the Conservatives don’t field a candidate in Clacton, because to do so would give further oxygen to Farage and UKIP and they may have better use for their resources than a place where they are likely to lose.

Perhaps more importantly overall, the chances are growing stronger everyday that Ed Miliband will sleepwalk into being the next Prime Minister.