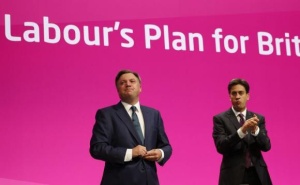 It was a strangely mute Labour Party conference today. There seem to be some strange rules in operation. The shadow cabinet, for instance, were only allowed to make speeches that were 700 words long, and were not allowed to make any noteworthy policy announcements. Ed Balls, the Shadow Chancellor, WAS allowed to make a speech, but it was also a rather lame and tame affair. It’s almost as if party’s leaders think that if they just keep quiet they might be able to slink unnoticed back into Downing Street. In truth, that might be possible, assuming no major mistakes are made between now and then. So, back to Ed Balls’ speech.

Ostensibly, it was about trying to convince the public that he and the Labour Party can be trusted with the nations’ finances. This is important given the main Tory attack on Labour is going to be to question whether to ‘give the keys back to those who drive the car into the ditch’. Labour know that opinion polls still indicate that they are blamed for overspending in the last Parliament, and Balls in particular was at the very least in the passenger seat. So instead of the barnstorming speech that might be expected of a man possibly 9 months away from 11 Downing Street (that was left to the indefatigable Len McCluskey, General Secretary of the Unite Union, who was his usual tub-thumping, deficit-denying self), Balls instead set out some policy priorities, many of which we already knew:

• A cut in business rates

• A 20-month freeze in energy bills

Many of these policies are popular, in that they have ‘tested’ well in the focus groups and opinions polls so beloved of the political class. It hits the wealthy minority where it hurts (assuming, and it is a massive assumption, they don’t find ways to avoid the taxes on their property and their income) which supposedly makes the less wealthy majority happy. So in theory Ed a Balls has done a good safe job here, without a huge amount of detail of how the deficit will actually be paid off by this tinkering around the edges.

But I have a question. In the United States it is much harder to win elections by threatening to raise taxes on the wealthy as, even though they are the minority, the whole point of the ‘American dream’ is that one day every voter who plants a cross in a box to tax the wealthy more could be one of those wealthy one day. What we don’t know, because it’s been an awful long time since anyone won an election by promising to raise income taxes, is how many people in this supposed majority, will, once in the voting booth, actually vote to pin more taxes on someone they may have the aspiration to be one day.

The answer may be in what Tony Blair said about Ed Balls in his autobiography. That he doesn’t ‘get’ aspiration. Balls and Miliband had better hope he’s not the only one.

Ed Miliband – you forgot the economy, stupid »
« Ed Miliband must speak clearly about why ordinary people should vote Labour