Nicola Sturgeon faces a full inbox, even without the opportunity of independence 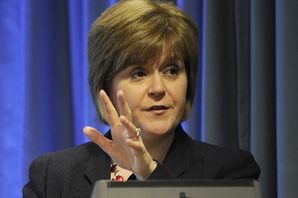 There were some existential questions for the Scottish Nationalist Party after the referendum was lost. If there is little chance for Scottish independence, what is their purpose? This of course ignores two issues: One is that there may be another referendum in the future, even though the SNP had called it a once in a generation event, and the SNP will want to continue building a case for that and do more to help make sure the next one is successful. The other is that Scottish nationalist interests remain, and someone needs to protect them. This is particularly true in view of the promises that were thrown at the Scottish electorate in the last desperate few weeks before the referendum on devolution. Someone needs to hold Westminster to those promises. This is why the quick coronation of Nicola Sturgeon as the next leader of the Scottish Nationalist Party, and thus as First Minister of Scotland, is sensible.

It is sensible because many were worried about the succession problem the SNP had, with Alex Salmond having been leader for so long, and a very effective one at that. He couldn’t be everywhere at once, so Sturgeon’s profile had been raised greatly during the campaign, and she had done a very good job whenever called upon. Far less smug and but no less combative than a Salmond, there is little reason why she can’t do a good job. It is a shame that there was no contest for the leadership, as Sturgeon said herself she would have ‘relished’ the opportunities presented by one. But there is a lot of work to be done, and with Salmond so obviously exhausted by what has happened, and possibly quite demoralised, the SNP are better served by not having any infighting and by installing a successor as competent as Sturgeon as quickly as they could. It will be a interesting battle for the Deputy Leader, as this may raise the profile of the some other leaders in the SNP, which is badly needed, given the usefulness of having a few possible successors, rather than an obvious one like Sturgeon.

Sturgeon takes over a party in rude health. Membership has gone up, for obvious reasons, from 25,000 to 80,000 in the past few months, and this means that they are likely to fill the 12,000 capacity SSE Hydro centre in Glasgow for a rally in November. This rally, which some may have thought might be a sombre affair after the referendum loss, will be invigorated both by being able to hail a new leader but also by the work that needs to be done to hold Westminster to account over devolution.

In 2016 there will be the next Scottish Assembly elections. At these, the SNP will try to achieve their third successive term in government. That is likely, but what is less likely, given a referendum is off the table for a while, is a renewed majority of seats. That was an amazing achievement in 2011, and something for which the Scottish election system was supposed to stop, but they did it. I wonder if, without the chance of a referendum, which it was plain the country was ready for in 2011, that will happen again. If it doesn’t, and there has to be a coalition, Sturgeon, and the SNP as a whole, will need to work with others again.

Before that is the 2015 Westminster general election. This might have been irrelevant had Scotland become independent, but now takes on a new meaning. The SNP will need to seriously debate the need to have a proper campaign for this, given Westminster retains powers over Scotland, and so they will be better for having representatives in London to protect Scotland’s interests than not. The tenor of the referendum campaign suggested that the SNP provide a real left-wing alternative to Labour and the Lib Dems in Scotland, which means that they could win a lot more seats than before, particularly if the Scottish Nationalist electorate, fired up politically by the referendum campaign, understand the renewed significance of Westminster to them. The Scottish devolution debate this week at the House of Commons was lacking in SNP input, so they will gain from being there after 2015.

So, plenty in Sturgeon’s inbox. Good luck to her, she may need it.

The Confected outrage at Lord Freud has shown politics at its worst »
« Lord Freud’s words were wrong. His economic analysis wasn’t.