UKIP are getting Labour voters who are ‘left-behind’, not ‘left-wing’ 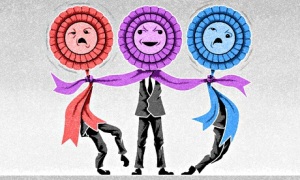 In the 1970s, some changes started to take place in terms of how businesses operate. Globalisation took root, and the world started doing business with each other. Just as you could buy products from abroad and you could sell products abroad, transportation and communication improvements meant that you could locate your factors of production (factories, workers) abroad too, whilst still selling their products in the UK. This meant that work that could be ‘outsourced’ (done outside the company, and outside the country if need be) could be sent to places where it was cheaper to hire labour or build a factory. That work used to be done by unskilled, or lower skilled workers in this country, but it went, abroad.

Then, the EU started to take shape, and the Maastricht Treaty made sure that the UK was committed to the freedom of movement of workers in particular, as well as other rules and law, that opened the way in the end (with the end of communism and the resultant wish to welcome the ex-communist states into the EU family), for millions of people to come to the UK to get jobs, whilst being prepared to offer themselves at the minimum wage at first, just to put down working roots here. These migrants were motivated, but also higher skilled than many of their English counterparts, and British firms benefited hugely from a cheaper source of productive labour. The British customer also benefited as they sometimes got cheaper prices.

But one group didn’t benefit at all from this transformation in how we work, and consume. Some groups got left-behind. They tend to have lower qualifications, they tend to be older, white and working class, and they were struggling before the economic crisis hit in 2008, then have been hit the hardest by the Coalition’s austerity policies. They are much closer to Labour on economic issues than they are to the Tories, feeling that the ordinary worker isn’t getting their fair share, and that big corporations are the enemy. Yet the Labour Party, whose entire ‘core vote’ election strategy was predicated upon the belief that these voters would have nowhere else to go but them, are seeing them leak to UKIP. Why?

Matthew Goodwin, author of what is so far the best look at UKIP, “Revolt on the Right”, argues that that these voters are making UKIP the most working class party that Britain has had since Michael Foot led the Labour Party in the early 1980s. They get viewed as ‘right-wing’ because they are also concerned about cultural issues as well as economic ones. The middle-class, highly educated liberal left who run the Labour Party now sneer at their cultural bias whilst also being afraid of addressing their economic fears properly as they don’t feel the resultant policies would make them electable. This is what happens when you have a party populated almost entirely by professional politicians, whose raison d’être is to be in power, rather than to actually help the people they profess to represent.

The ‘left-behind’ cherish a certain set of values. They see their way-of-life and identity being threatened by all the changes that are going on in the world, let alone the UK, and essentially want to either “stop the world and get off”, or have policies that specifically address their genuine anxieties about their lack of resources and inability to react to the rapid social and economic changes that are leaving them behind.

Goodwin’s point is that UKIP didn’t create their anxieties about the impact of the EU and immigration and their dissatisfaction with Westminster Politics. Instead, Nigel Farage identified these divides and managed to mobilise them back into politics. The mainstream parties have tried to talk to these voters in narrow transactional terms, attempting to win them back by setting out the economic case for migration and EU integration. But these voters aren’t interested in how much immigration is contributing to national wealth. Their concerns can’t be addressed by a policy tweak or populist speeches. They “want their country back.”

If that can’t happen, they want a way forward, that takes note of their anxieties and fears, doesn’t lazily label them as “racist”, and understands that there is now a genuine conflict in the UK between those for whom the changes of the last 40 years have been great, and those who have been left behind.

It is this that is the reason why Labour may not win the next General election. Their core vote strategy assumed that they would retain the voters from the last election (29% of the electorate), plus another 6% of Lib Dem voters who were upset at their vote being used to prop up a Tory government. But that assumption didn’t consider the possibility of some of their core vote having somewhere else to go. It’s gone.

Combatting UKIP over policies..the lack of them and the flip-flops »
« “The Nationalist” – a first pro-independence Scottish newspaper…ready for the next referendum?

3 thoughts on “UKIP are getting Labour voters who are ‘left-behind’, not ‘left-wing’”