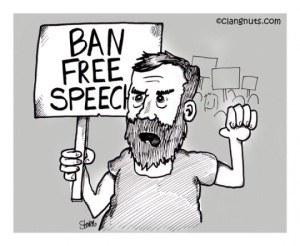 The most depressing thing about the story (click here) of students at the University of East Anglia coming together to try and ban a political debate involving UKIP is that it was not surprising. That many of those on the left believe that freedom of speech only applies if you agree with their point of view is something I have had to get used to over the last 10 years after joining a profession that contains more than its fair share of left-leaning people.

The local UKIP general election candidate Steve Emmens, had been due to speak at an event organised by the university’s political debating society, but it was allegedly cancelled by the university as the ‘correct procedures’ hadn’t been followed. This apparently meant that the procedures require “that the event includes clear debate and challenge to the views of the external speaker via an opposing speaker chosen on the basis of robust and fair challenge.”

But what saddens and frustrates me most is the quote at the bottom of the article from the international student who organised the petition that led to the University initially cancelling the event. Timea Suli, a student liaison officer who already has a First Class BA in politics (I can only assume she missed the lectures on liberalism) from the university, said: “We are hoping to gain attention on the issue and encourage support from people who believe that UKIP do not deserve a podium at our tolerant campus.”

Yes, a legitimate political party who have been taking part in our democratic system now for 20 years, are our leading representatives in the European Parliament and have two Members of Parliament in the House of Commons were subject to a petition to ban them based upon the issue of “tolerance.” You almost couldn’t make it up. That this was led by someone who has actually studied Politics possibly shines a light on the quality of UEA’s politics teaching or Ms Suli’s intellect. But I don’t blame her actually, she is following the accepted procedures for those on the left who don’t like what someone is saying.

I don’t agree with almost anything UKIP are saying. They don’t speak to me at all. But they plainly do speak to many others. If you disagree with someone, debate with them. If you don’t like what they say, listen to them, read what they say, and develop arguments against them. If you feel that what they are saying may cause ‘intolerance’, at least respect the fact that they are using the Parliamentary system to say it. If you muzzle people, if you don’t allow democracy to work, they will use other means to get what they want and get their point across.

At the moment, the left are panicking about the potential loss of voters from Labour to UKIP. They are both panicking and bewildered. The reason it is happening (as I explained last week), is because those people, many of whom have been economically dispossessed by the consequences of policies that Labour have supported, are being pointed at and laughed at by Labour, instead of talked to and listened to. When they see something like this, they will see once more that the left have no interest in them, and more economically disadvantaged people will vote for a party that believes in flat taxes, a health service based on private insurance, and removing the investment, economic growth and jobs created by being part of the EU.

UKIP, whether we like it or not, are shining a light on our political system, and we may not like what we see, but we have to adapt to it. By closing our ears, shutting our eyes and hoping they go away we will only make them stronger. By opening our ears and eyes and properly challenging their arguments we can stop their advance.

My final question is this. If UEA students want to ban political parties from speaking who preach intolerance, can I assume no religious groups of any fundamentalist persuasion would be allowed there too? Particularly those religiously fundamentalist groups traditionally supported by the left? What do you think?

Cameron needs to take on his party’s own Militant Tendency »
« Jack Monroe, and the left’s confusion between wrong and wicked