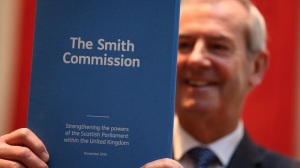 How sad that in their determination to throw the kitchen sink at winning a referendum that any understanding of the problem with opinion polls would have told them they were going to win anyway, the defenders of the Union have set us on a course for an inevitable breakup.

I said at the time that I was concerned about Gordon Brown telling the Scottish public that they would have ‘nothing short of a modern form of home rule’ should they vote “No”, in the referendum. I was even more concerned when David Cameron rushed out onto the steps of 10 Downing Street at 7am the morning after a win by a margin that in any other election would be termed a landslide to promise “English votes for English laws” (hereon rightly termed as ‘EVEL’) and a thoroughly hurried timetable for achieving this.

Sure enough, the greatest fears of those of us who actually understood what Brown and Cameron were offering have been realised. The Smith Commission, which had been set up by Cameron and told to report by Christmas, reported last week and put forward a new constitutional settlement that is effectively driving the Union off a cliff. That Smith’s proposals are unworkable within the Union is obvious. That, in Smith’s hurry to meet his deadline he haven’t even bothered to suggest how his proposals could work is instructive. But delivered they must be. So let’s look at what. Is going to happen.

First of all, the Barnett formula is being kept. This formula means that Scottish people get 20% more per head of public spending than anyone else in the Union. Lord Barnett himself, who sadly died earlier this month, argued that his formula was created in the 1970s as a stopgap, and wasn’t fit for purpose anymore. But still it is being retained, despite the rightful complaints of the English, but more understandably the Welsh, who lack the natural resources Scotland had and therefore need more help.

Firstly, the Scots will be responsible for administrating income tax, but the UK will be responsible for administrating savings tax. Anyone like me who has done a self-assessment form will know that savings count as income, so tax on them needs to be collected together. The Smith Commission’s suggestion as to how on earth this will be done? Nothing.

Secondly, there is little doubt that the Scots will use this opportunity to increase the tax rate on the top bands of tax. The SNP have said they will do it and even Jim Murphy (the candidate for leadership of Scottish Labour from the right of the party) has said he will be raising the tax rate for those earning over £150000 a year to 50%. Helpfully, Murphy tells us that there are 160,000 people in this band and the switch back from 45% to 50% will raise £250m. Sounds good doesn’t it?

Ok, what happens if those people move to England to avoid it? Scotland misses out on their entire contribution to income tax altogether. Who will they turn to to bail them out with a loan if their tax revenue falls. That would be the Bank of England. This is exactly why we couldn’t have had monetary union if the Scots became independent whilst remaining fiscally separate. The Rest of the UK can’t be expected to guarantee the debts of a country fiscally separate from it. It hasn’t worked with the EU and it won’t work here either.

Finally, there is EVEL. Again putting this simply, and using income tax as an example. If the Scottish Assembly has full responsibility to income tax then MPs representing Scottish constituencies would not be able to vote on the income tax policies for the rest of the UK. So there you go, two classes of MPs at Westminster, something that is not what our Parliamentary system should contain, and also, of course, and don’t think Cameron doesn’t know this, a Labour majority on tax policy, even if they are in Government, becomes impossible, because those Scottish votes go.

Enoch Powell gave a speech in Parliament in 1975 about this. In it, he pointed out the truism that “a debate on defence is also a debate on education”, to explain why you every debate on every policy is never just about that one policy. If England votes to spend more on the NHS, that affects how much Scotland gets for their NHS. So EVEL affects Scotland. The second thing that Enoch Powell said was that “the powers and status of all parts of the federation must be identical” if law making was going to be broken up in this way. This was prescient, given Wales are asking, and even some cities in England with mayors are asking, for the same powers to be given to them as have been given to the Scots.

Which brings me back to how the Smith Commission has effectively started the engine on the break up of the Union. The SNP will continue to push for a second referendum, especially as the Devo Max option we are seemingly on a crash course to try will not work without chaos.

Such a shame Westminster politicians panicked so much.