Why Christmas is one big free Coca Cola advert 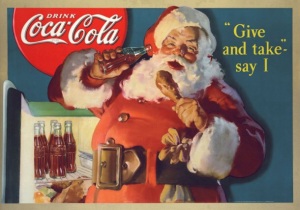 Joining the many children, both young and grown-up, who are sad to see the back of a Christmas after today, will be the marketing department of Coca-Cola. For today marks the beginning of the annual end of the longest free global advertisement for any brand. To explain why that is, I would like you to picture Santa Claus, picture the Santa hats you see, and then take you back to 1931.

Coca-Cola headquarters were frustrated at the lack of sales once a Summer came to a close. The drink was seen as a refresher during warm weather, and so the marketing department were sent away to think up a way to increase sales throughout the rest of the year. Never in their wildest dreams did they think that what they were about to come up with was going to mean Cola-Cola would end up owning Christmas. But it did.

Before 1931, the Santa Claus that we know and love was not a big jolly man in a red suit and a white beard. Santa used to be depicted as everything from a tall, gaunt man to a rather spooky-looking elf. He might be found dressed in a Bishop’s robe or a Norse Huntsman’s animal skin. Civil War cartoonist Thomas Nast drew Santa Claus for Harper’s weekly magazine in 1862 as a small elf like figure who supported the Union. Nast drew Santa for 30 more years, mostly in a tan coloured coat, but eventually in a red coloured coat.

In 1931, Coca Cola asked the artist Haddon Sundblom to create a picture of Santa Claus that they could use in advertisements. They wanted a wholesome, realistic and symbolic Santa Claus. Sundblom turned for inspiration to Clement Clark Moore’s 1832 poem ” A visit from St Nicholas” ( which we know better as “‘Twas the night before Christmas”). In that poem, Clark Moore created an image of a warm, friendly, pleasantly plump and very human Santa. Sundblom’s Santa thus came into being (see picture at the top of this blog) and was launched under the campaign slogan “Thirst knows no season.”

Coca Cola themselves have admitted that they can scarcely believe their luck. But, credit to them, they have ridden that luck to where they are today. Merry Christmas everyone!

“Thirst knows no seasion” Used to be a department store santa – a man dressed as him.

led to an image of a warm, friendly, pleasantly plump and human Santa. (And even though it’s often said that Santa wears a red coat because red is the color of Coca-Cola, Santa appeared in a red coat before Sundblom painted him.)