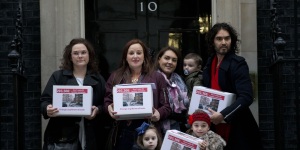 Those (like me) who thought Russell Brand was nothing more than a self-publicist with little idea what the results of his ‘revolution’ would be and little wherewithal to actually achieve anything were proven wrong in the week before Christmas.

Hundreds of low income families were able to spend Christmas without the worry of impending eviction from their homes, helped by Brand’s intervention on their behalf. Suddenly it seems that he might really be a rebel with a cause.

I was originally going to criticise Brand for stating on his appearance on BBC1s ‘Question Time’ that he wouldn’t stand for Parliament because he would just become ‘like one of them’. I was going to say that ‘one of them’ means someone who actually has to take responsibility for the consequences of what they are saying, ‘one of them’ means someone actually responsible for what our Health, a Education and welfare systems were delivering. I was going to say that it spoke volumes for Brand that he wasn’t prepared to put himself in a position of any accountability. But then he went and actually showed what ‘one of them’ was, in relation to the situation with the New Era estate in Hackney, and I realised he might actually be right.

The New Era estate is in the borough of Hackney, which had become steadily gentrified over the last 30 years to the point where there are properties that will be subject to the mansion tax should Labour get in. The estate itself, mainly consisting of four-story buildings with flat roofs and metal framed windows, were built by a philanthropist in the 1930s with the aim of giving the working class people who lived there access to hot running water, electricity, indoor lavatories and baths. Rent had remained extremely low for the area even as they skyrocketed around them. This enabled the New Era estate to retain its tenants for the long term and build up a community feeling amongst its inhabitants that rarely exists across Urban London.

This was all threatened when the family that owned the estate sold up to Westbrook Partners, a US investment firm who had spotted the amazing opportunity that location had, and wanted to redeveloped the site. To make this possible, Westbrook had announced a tripling of most of the rents, leaving many low income families on the estate under the threat of eviction. Some campaigning had at least achieved a pause on this process, meaning the inhabitants of the estate were not to be evicted before Christmas. But it was still going ahead.

Those inhabitants had tried as many avenues as they could to protest this move. They had tried political avenues, the media, and even protesting outside Westbrook’s offices in Mayfair. Sadly, they were getting nowhere, until Russell Brand arrived.

Brand comes from working class stock. He knows what it is like to struggle, and has said that he now wants to use the celebrity he has to help people who are struggling like he was. Because he can. Brand believes that there can be no reason in a country as rich as the UK that people should lack security of food, warmth, and housing, and here was an opportunity to do something about it. But this wasn’t just about whether or not people have housing, he wrote, “I was compelled to stay, as if held by the heart, by a deeper issue, both social and personal. By something I didn’t even know I was grieving; the loss of community, our connection to each other.”

So, when the residents of New Era protested outside Westbrook’s offices, Brand arrived to help them. When they marched to Downing Street, Brand marched with them. He also mobilised his social media following and access to national newspapers to publicise their cause. The issue had been ignored by the media until Brand got involved, but suddenly, as protest organiser Lindsey Garratt said, Brand’s involvement “gave us a bigger voice. And rather than taking over, he gave us a much bigger audience to speak to”.

The important thing to understand is that it wasn’t just the media ignoring the plight of the residents of New Era, it was the political establishment too. Hackney’s Mayor and Hackney’s MP Diane Abbott apart, nobody had showed interest. Nothing from the Labour party, nothing, even from the Greens.

There were two diametrically opposed sides to this story, and you would think it should be easy for politicians to choose sides. As the Guardian pointed out: “On the one hand, a single mother working for the NHS faces the prospect of her monthly rent rising from £640 to £2,400; on the other, absentee landlords with a global property empire headquartered in Madison Avenue, Manhattan, want to maximise their profits.”

As a journalist covering the issue wrote, “From my observation of this case the politicos seem to want to deal in bland generalities and act as middlemen between people and power, rather than as representatives of the people.”

That was until Brand came in and filled that vacuum. He may be just an entertainer, but here his celebrity amplified their protests to the point where something got achieved. This is the point, in the absence of the political establishment being prepared to represent the people, against corporations who have a lot of money and can pay lobbying consultants, the people need their own advocates. The residents of New Era got Russell Brand.

So when Westbrook Partners withdrew announced before Christmas that they were withdrawing from evicting the families, and then announced that they were selling the development to Dolphin Square Charitable Foundation, an affordable housing organisation, it was a quite astonishing victory. But it was also a victory that showed that Brand might be a lot more than the “voice of the discontented wealthy” that the journalist and author Nick Cohen had written him off as. This was a political success for society’s invisible souls, and it happened because Brand came and shone a light on their plight, and almost definitely wouldn’t have happened had he not.

He may seem irresponsible, and he may not be able to deal effectively with criticism, but anyone who says that Russell Brand cannot be a force for good should be pointed towards the people of the New Era estate. They’re the ones sitting in their homes, safe and warm, because of him.