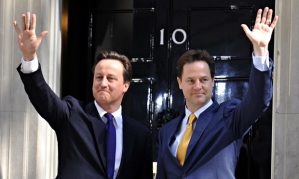 Reports emerged earlier this month that the Conservatives are planning to change the way Coalitions are formed to limit the amount of power and influence the ‘Junior partner’ in the coalition can have. This comes as a response to what the Tories consider to have been a disproportionate allocation of both ministerial jobs but also positions as heads of committees and in particular places on the ‘Quad’, who had final sign off for government policies.

Mathematically, a limit on junior partner influence would make sense. Whoever is the senior partner in the upcoming coalition will have around 300 seats whereas the Lib Dems for instance may have at most 40 seats, which is the also the maximum that the SNP might get. In that situation, it could be seen as fair to not give the junior partner the level of influence the Lib Dems have just had.

At the centre of all this is the acceptance by Tory backbenchers that their previous demands that David Cameron try to lead a minority government should there be a hung Parliament is simply not realistic. Fed up of the compromises they had to make with the Lib Dems over the last 5 years, the influential 1922 committee had at first wanted Cameron to have a go at governing without any help. However, that would have probably led to a quick second election, as the opposition parties would have pushed very quickly for a vote of no confidence.

But it isn’t just that. In 2010, in order to get things done, Cameron didn’t allow the Tory MPs a vote on whether the coalition should go ahead. Lib Dem MPs were allowed a vote, and voted for it, but Tory MPs weren’t, and therefore have felt within their rights to complain about the effects of being in coalition on Tory policies. This time, Cameron has said he would let them have a vote, and the 1922 committee have asked for that to be a secret ballot, so that even senior Tories can vote without pressure to go along with the Tory leadership’s line.

To get through that vote, what can’t happen is for the Tory negotiation team to make so many concessions to get the deal through that it even surprised the Lib Dems. The Lib Dems were given two seats on the Quad, the group of four people signs off all policies. It has been Cameron, George Osborne, Nick Clegg and Danny Alexander. The Tories want that reduced to one. The Lib Dems were granted 23 ministerial appointments (out of 100), and that seriously reduced the opportunity for Cameron to use his patronage to reward loyal backbenchers as well as giving Lib Dems more influence than they should have had. This would be reduced to 10, as it is very likely the Lib Dems would only get a 10th of the amount of seats of the Tories. Vince Cable has spent 5 years as Business Secretary, despite his outspoken leftish leanings, disloyalty to much of the coalitions’s agreed policies, and perceived anti-business sentiment. The Tories feel that such an important role in a Tory government shouldn’t go to someone like Cable again.

But the most significant move is related to a position held by Nick Clegg that not many people knew about, and one that he treasured the most. Clegg has been the chair of the Home Affairs Committee. This committee approves or blocks all domestic policy, and has seen Clegg reject some central planks of Tory policy, particularly in the field of education, childcare and homeland security. The Tories argue that a junior partner in a coalition should never have been given that power. It looks like if Cameron wants a coalition to be voted through, that won’t happen again.

Ultimately, these changes will make it harder for the Conservatives to gain agreement from a Junior coalition partner. But governments last for 5 years and we are no longer in a financial emergency, so there is no reason why the coalition negotiations would need to be hurried in 2015. Put simply, getting it right will make the difference between a new government lasting for the full five years and needing a new election. Furthermore, it may well make the difference between the Conservative party holding itself together or not. More of that in my next blog….