What to do about the high cost of low price milk? 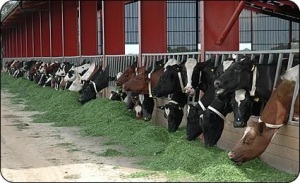 It is often the case that when people ask whether a staple food going down in price is ‘good for the economy’. It is not too difficult for the man on the street to understand that the price of milk falling leaves more disposable income in our pockets to buy other things we need. Yet economists know that there are some situations where prices falling are not ‘good for the economy’ in the long term, which is why the fall in the price of milk is being studied so closely, and the Government may even be in the situation where they need to act. Yet, as is the joy of economics, it is not as simple as it seems.

To understand the situation, one has to learn some lingo. In particular what is known as the “farm-gate” price. That is how much dairy farmers get when they sell it onto wholesalers. Most dairy farmers have contracts to supply “milk pools” of dairy processors such as a Dairy Crest, Arla, Muller Wiseman and First Milk.

The contracts are subject to sudden fluctuations should global commodity markets become volatile. Last year, milk prices slumped as New Zealand upped production, Russia banned EU imports leading to Baltic States cutting prices and Brussels abolished the EU milk quota system, which had discouraged the more efficient dairy farmers around a Europe from increasing supply. Prices of cheese, fromage frais, yoghurt, butter and milk butter have fallen too, so there is no escape for dairy farmers in premium products. Then the supermarkets upped their strategy of offering milk as a ‘loss leader’, which has seen a four litre carton’s price fall from £1.60 to £1 at Waitrose and 89p at Asda.

So, as David Handley of the lobby group Farmers for Action pointed out recently, the price of milk has been cut until it is seen as a throwaway product, and “there is only one thing that is ultimately going to happen to those who produce it.”

Put simply, British farmers are able to produce milk from their cows at about 30p per litre, but they are only selling it for about 24p per litre. This is simply uneconomic. The National Farmers Union is warning of a “mass exodus” of dairy farmers unless the government steps in to protect an industry which is vital to our rural economy. They suggest the industry watchdog, the a Groceries Code Adjudicator, be allowed to impose heavy fines on dairy processors and supermarkets who are imposing unfair practices.

Possibly, they are harking back to the days of the Milk Marketing Board, set up in 1933 and lasting until 1994, which offered a guaranteed minimum price to Dairy farmers and ran popular ad campaigns (see bottom of this blog for links) for milk. Yet the National Farmers Union didn’t like the Milk Marketing Board, as it didn’t allow farmers to choose their own buyer. They may have learned now to be careful what they wish for.

Which is where economics come in. Consumers getting milk for lower prices seems good in the short run. Dairy farmers not getting enough money to stay in business is bad in the short run and long run. But the new reality of milk prices may mean that in the long run some changes take place within the dairy industry that benefit us all. Or not, as some might say.

Our UK dairy farms are small and inefficient. They produce milk at 30p a litre and that, in a time of falling milk demand and global competition, is simply not good enough. They lack economies of scale and so there is a push for dairy farmers to adopt practices like ‘zero-grazing’, which is where, instead of cows being allowed out to pasture in the summer, they are kept inside producing milk and fed the grass they need. This can be done on a large scale, and would make it possible for dairy farms to have 1000 cows rather than 125 cows, and suddenly their costs would fall.

That idea is countered by the consequences of it. Many argue that the loss in terms of animal welfare and the loss of the sight of green fields dotted with black and white cows would be something we would live to regret.

The trouble is for those who oppose the new methods, that they are yet to come up with a better idea to deal with the volatility of global commodity prices, a brutally competitive supermarket sector, and the cost of living benefits for consumers able to buy milk cheaper than bottled water.

Oh the joy of economics in the real world!

FPTP encourages Greens to be unrealistic in their demands. »
« Plain packaging on cigarettes – could it actually increase smoking?