Fixed Term Parliament Act and chaos. One may begat the other. 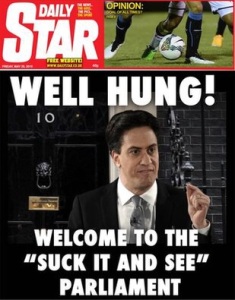 Deep within the Coalition agreement between the Conservatives and Liberal Democrats in 2010 was the Fixed Term Parliament Act. The key part of this was to fix the date of the next General Election for May 7th 2015, but in addition there were some conditions set for how to call an election within the term of Parliament. These conditions are about to become very important, not just because of the almost impossibility of one party gaining a majority on May 7th, but because it is quite possible that a functioning government capable of actually passing any bills might not be formed. So it is worth looking at now what could happen. My thanks to Sky News Political Editor Adam Boulton for explaining the following.

Boulton points out that even though it is possible that nearly 40% of the electorate will vote for a party other than the Conservatives or Labour, we don’t seem to like the result of that. An Ipsos Mori poll last December showed that 60% of respondents didn’t want a hung Parliament, with 32% for it. Tough, Boulton says, because this is what we are headed towards, and because of the Fixed Term Parliament Act we don’t have the option of simply calling a quick second election to clear up the mess that is very likely to be left by the first one. In fact, it is quite possible the Act could cause years of uncertainty, with government and therefore Prime Minister changing hands on several occasions without the electorate being consulted again. Without a written constitution, we just can’t be sure what will happen. Politicians are actually quite sanguine about this, because it gives them plenty of room to manoeuvre. Those manoeuvrings will be complicated.

The result of the preparation of the ‘Cabinet Manual’ ordered by Gordon Brown and created by former cabinet secretary Gus O’Donnell was that there were two major stipulations: That the sovereign be kept out of any negotiations and also, more importantly, there was continuity of government. This means that until a new government is created, David Cameron and Nick Clegg would remain Prime and Deputy Prime Minister. However, a bad Tory result could mean that the party wants to be rid of Cameron sooner, and the same with the Lib Dems, although it is inconceivable either would do it too irresponsibly if time is really needed for successful negotiations.

The result of those negotiations could be anything, although it is believed that antipathy towards the Tories and Tory antipathy towards coalition means they would attempt a minority government, whilst Labour are more likely to take the coalition route to power under Miliband.

Boulton tells us then that any new government has to be ratified in the Commons by winning a vote on the Queen’s speech. A new speaker would have to be elected before that vote can be held, and that could take a while too.

Should the new government, be they minority or coalition, be defeated in a vote on the Queen’s speech, a budget or a vote of confidence, the Fixed Term Parliament Act doesn’t trigger an immediate election. Instead, there will be 14 days to try and form an alternative government.

There can also be a switch to an opposition-led government during the next Parliament term, should the governing party not be able to keep it together, as is more than possible for the Conservatives after an EU referendum.

The upshot of all this is that the Prime Minister can no longer call an election, and don’t have the automatic first opportunity to form a coalition. This WAS the case in February 1974 when a hung Parliament meant Edward Heath, even with less seats and votes, tried to form the Government first, but failed so handed over Downing Street to Harold Wilson, who called another election in November 1974 to try and get a majority (which he did, just).

Boulton’s final point is this. The voters are voting for political parties outside the main two. This means that it is more likely no party will win a majority of seats. Therefore, whilst voters don’t like hung Parliaments they should be careful what they wish for should they put a cross against UKIP, Green, SNP or even Lib Dems on their ballot paper. I can predict very little for May 8th, apart from chaos.

£6000 tuition fees – sneaky short-term political opportunitism »
« Left wing supply side policies – Why and how Labour CAN be socially democratic without money.