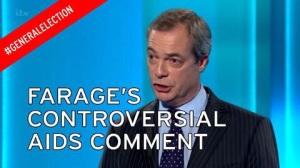 During last week’s leaders’ debate we saw the launch of what UKIP insiders have called a ‘shock and awful’ strategy by Nigel Farage. Given the time and space to start the debate on the NHS, he chose to focus on health tourism, the use of the NHS by immigrants. In particular, he chose to talk about the people diagnosed with HIV positive who come to England so that they can receive treatment, which can cost up to £25,000 for a course of drugs. Despite being told he ‘should be ashamed of himself’ by Plaid Cyrmu leader Leanne Wood, Farage is satisfied this was the best use of his time in the spotlight. It shores up the UKIP vote and he is aware that 20 Conservative MPs tried to put down a motion about this last year and were ‘slapped down’. Therefore, Farage thinks, it increases the chances of Tory defections to UKIP post-election as he drives another wedge between them and their party.

But as an example of the incoherence of UKIP policies it takes some beating. Earlier in the debate Farage had insisted that he would take aim at the foreign aid budget, which he would at least halve, if not do more. He says that the parts he would remove are those that go to countries like India that have their own space programme and advanced military, but given the strategic way in which foreign aid is often used, it would be Major future trading partners like India who would still get foreign aid and countries in desparate need of it like in Sub-Saharan Africa who would have aid reduced.

Now, think about how countries might use aid. In sub-Saharan Africa, should you be diagnosed HIV positive, you have few choices, because without foreign aid you are unlikely to have a health service capable of providing the drugs you need. Therefore it would be no surprise for those people who want to come to the UK to receive the treatment instead. If Farage wants less of that to happen, cutting the foreign aid budget is the last thing he should be doing.

Supporters of cutting aid argue that it creates dependency on it from its recipients, and there are plenty of economic arguments to confirm that. But we all benefit from supporting health and education services around the world, particularly in poorer countries where the lack of a proper tax collection system means that they only collect 18% of GDP in tax, as against 38% in the developed world, meaning public services are very much under-funded. A healthier, better educated population in the developing world increases world output, world consumption, work living standards, and reduces the spread of war and disease.

So if Nigel Farage really wants fewer health tourists, he should understand our responsibility to reduce the peoples’ need to do so. He may argue that under UKIP the rules would simply stop someone being treated on the NHS if they are a designated health tourist. Does that mean that if someone turns up at hospital desperately ill they would be left on the pavement outside dying? That isn’t the country I want to live in.

The Greens are the only party with a proper long term message. Shame about the messenger.  »
« ‘Nikileaks’ case might be the ‘Zinoviev letter’ of our times