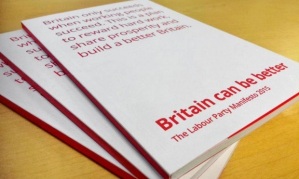 There are a variety of reasons why Ed Miliband stood up at the lectern yesterday to deliver Labour’s General Election manifesto full of confidence and looking like a leader who genuinely believes he could be Prime Minister. It has been a terrible week for the Tories, and a very good week for him. What’s more, he was presenting a manifesto that offers something different. It was different from the Tories, different from New Labour, and, importantly, different from ‘Old’ Labour too. (For summary of manifesto click here)

He was talking at the end of a terrible week for the Conservatives in which they lurched from incoherent spluttering in response to Labour’s abolition of Non-Dom status to a “Dead cat on the table” strategy of writing articles comparing Miliband ‘stabbing his brother in the back’ to ‘stabbing the country in the back’ over Trident in a deal with the SNP (‘dead cat’ because it is a political tactic in which you put something horrible on the table on purpose because it is not as bad as the news story (‘Non-Doms’) it replaced) and then the commitment to providing £8bn a year for the NHS, which George Osborne was unable to explain the funding of 18 times on Sunday on Andrew Marr’s BBC programme.

Reading the manifesto, I was struck as an A-level political ideologies teacher at how Miliband’s Labour was putting flesh on the bones of some of the ideas they had tried to put forward over the past few years, a without actually making that clear. Rather than embracing capitalism, like New Labour, or providing an alternative to capitalism, like Old Labour, Miliband was determined to use his Government’s power to reward ‘responsible capitalism’. There were policies and incentives and words of encouragement for productive capitalists to thrive in the place of predatory capitalists. The latter (banks, energy companies, people who pay their staff too little) would be hit by price freezes, taxes, levies and legislation. The former (particularly anyone who pays the living wage, something Miliband won’t legislate for) offered tax credits, freedom from certain regulations and the occasional subsidy too.

There was also, without naming it, a proper debut for ‘predistribution’. This aims to reform markets without costing the taxpayer, by including employees on remuneration committees, raising the minimum wage too. There would be encouragement for investments in vocational training (including a push for schools to offer the ‘technical baccalaureate’), which may cost money up front but could pay for itself many times over in the future. Labour don’t quote say it, but there needs to be a “supply-side revolution” if inequality is really going to be solved long term. If you raise the productivity of workers, then they can earn more. It’s a long term plan, but it is important. If it works, redistribution is needed far less in the future.

Finally on the ideology side, as pointed out by Anne Perkins in the Guardian, was “the calculation – supported by plenty of poll evidence – is that there is an abiding communitarian spirit in the country that will respond to a genuine commitment to promoting solidarity and shared success rather than putting individual aspiration first.”

The most striking aspect of the manifesto through, was how reducing the deficit was put front and centre of it. It was a combination of political judo and a classic sales closing technique. Political judo because it took what is supposed to be the Tories’ main strength – economic credibility – and uses it against them. The Tories have made a variety of unfunded tax cuts and spending commitments recently, including a rise in the personal allowance and the higher rate threshold, freezing rail fares, 3 days volunteering a year for employees and that £8bn for the NHS to meet Simon Stevens’ recommended funding uptick, but are simply not telling the electorate how they will pay for it. Labour are saying that every policy in the manifesto is paid for, with no additional borrowing. The Tories may not be able to say that about their policies.

The classic sales closing technique is this: If you really want to close a sale, you can’t do it without bringing out the objections a customer has to committing to the ‘purchase’. Once the objections are out in the open you can address them, and try and overcome them. Once that has happened, the sale can be closed. It is the same with voting. If, as Labour must obviously know, and let’s not forget they have had apparently 2.5 million doorstep conversations during the campaign, that the main objection is a lack of trust in the economy, attempting to address and overcome it front and centre of the manifesto is a classic sales closing technique. Some may argue that highlighting the main salient issue of an election, and one that you are losing on in polls, is not a good idea. Others that it is exactly what you should do to he win back the voters who want to shelter under the Conservatives’ deficit reduction wing, by committing to reduce the deficit every year. This included committing to not doing political deals with other parties who won’t do the same thing. The IFS, a respected independent think tank, did admit to being concerned that Labour hadn’t given a deadline for clearing the deficit, and were only talking about the current deficit (day to day spending, not including spending for investment), so could actually clear the deficit they were talking about by 2020 without actually making any cuts. But the manifesto did make it clear that at least the deficit matters now. It was effectively the day when Ed Miliband grew up.

This approach may not be particularly inspiring for a labour activists. Some left leaning columnists are arguing that Labour will lose more voters to the left with this manifesto. That the parties claiming to offer an ‘alternative to austerity’, such as Greens, SNP and Plaid Cymru, will get more voters. But Miliband has an answer to that. He says that he, unlike those parties,  could be a Prime Minister, could actually have to deliver the policies, could have to answer to the financial markets who may get impatient if the deficit rises again. He would thus rather provide a manifesto that can actually be delivered than a manifesto that might win more votes.

More power to him for that. Game on, Dave.

The Conservative Manifesto relies on us trusting them. Have they earned it? »
« Lessons from The Godfather for Ed Miliband: Offer the SNP nothing.