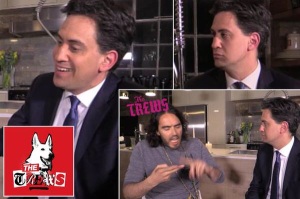 Ed Miliband has said from the start that he won’t duck debates in this election. So when it was discovered that he had filmed an interview with Russell Brand it was less of a surprise than it might have been. Before watching it, some may have thought it was a risk, given Brand’s rather nihilistic approach to politics. But, as it turns out, it was really rather successful.

Brand started off by asking about the unelected powerful elites controlling the country economically with their talons in the Tory Party. This makes people who are expected to vote feel that there is no point in doing so. Brand talked about the suffragettes who were given the right to vote but he felt that hadn’t actually achieved much since then, Miliband disagreed, giving a list of the Acts of Parliaments that have made a difference, including the creation of the NHS to gay marriage, minimum wage etc. Miliband said that progress comes from people wanting change, putting pressure on Governments to make changes,and without politics, change doesn’t happen in society.

Brand runs through bankers committing fraud and getting away with it, HSBC helping people avoid tax and getting away with it, and he wanted to know what Miliband would do to take on the powerful forces that seem to be ignoring the laws and being able to get away with it. Miliband suggested that his entire argument in the campaign is who the country is run for. Ordinary working people? Or the richest in society. He has been clear in his believe that a more equal society works better and he will do what he can to achieve that. It’s all very well putting bankers in prison, but how do we get a banking system that helps small businesses and ordinary people to succeed.

Brand suggested that in 2008 the banks were bailed out with £850 billion, since then £840 billion has been avoided in tax. Miliband was quick to point out that we had no choice but to bail out the banks as the financial system couldn’t have been allowed to crash. Brand pointed out that this is why people like him are frustrated, because there seems like nothing that can be done to change the way the country is run as certain people know that they will be bailed out if they get it wrong and won’t be going to prison. He wanted to know what Miliband was going to do about this powerlessness people feel. Miliband named areas such as zero hour contracts where he will be taking on powerful interests in the name of ordinary working people.

Brand took on corporation tax avoidance next. He mentioned that Amazon pay 0.05 of their income in tax whilst basic rate taxpayers pay 20% in tax. Miliband explained that there needs to be an international agreement to solve multinational tax avoidance. That is the reality in a world of mobile, international capital. Miliband said, then, that all that could happen is for the UK Prime Minister to be prepared to do whatever he can to push for that international agreement.

Brand then asked why a law can’t be passed to reduce the power of individual media owners. Why can’t Reupert Murdoch be limited to 10-15% of newspaper ownership. Miliband pointed out that Rupert Murdoch, partly down to being stood up to by the Labour leader, is a much diminished figure already.

Brand complained about Tony Blair and Barack Obama letting so many people down by promising so much and, in some peoples’ eyes, delivering so little. Miliband said he is trying not to be unrealistic and make promises that tomorrow is going to be a brighter day. He doesn’t think people will believe someone who says that and some people don’t want change that quickly anyway. He wants to change how the country is run and who it is run for and he wants to convince people that he has the will to make those changes.

At the end of the interview one had the feeling that Brand had gone into the interview determined to give Miliband a break. He was so clear that he was against everything the Tory Party stands for that if he did have a chance to vote, he would do what he could to get them out, which he realises involves giving Miliband a little bit of help. That said, he still asked Miliband some tough questions.

The pity is that it was a bit late. The voter registration deadline was last week. So someone deciding to vote having never registered , perhaps having taken Russell Brand’s advice a year or so ago not to vote, cannot now decide the register. However, there could be someone who is registered to vote but had decided not to who might now be motivated to vote, and most probably for Labour. What certainly didn’t happen was Miliband coming across as any sort of “joke” in David Cameron’s words. He came across as serious and realistic and didn’t do himself any harm. Anyone who says his interview with Russell Brand HAS harmed him may not have voted for him anyway.