The Electoral Maths that could put George Galloway in charge 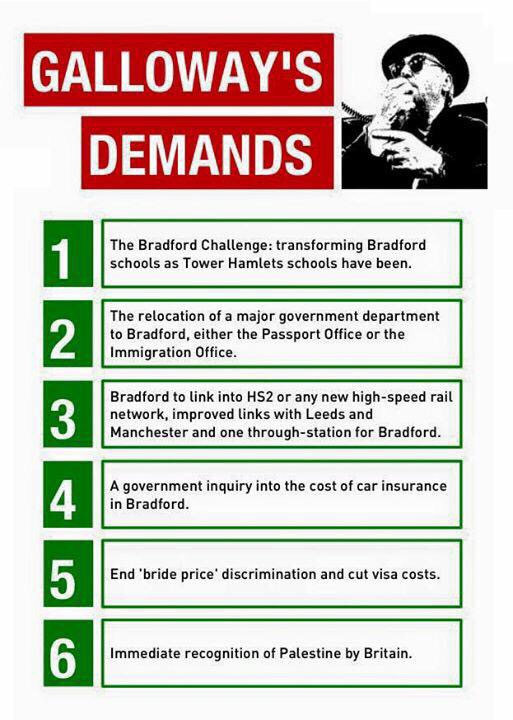 Take a look at the demands above. They are those of a George Galloway. Given the Respect Party MP is extremely likely to be the only MP the party has in Parliament, you would imagine that he may not have much influence. But there Is now a perfectly plausible circumstance under which Galloway could have the casting vote on the Government. You can bet he knows it too.

Here’s how it works. In order to gain a majority of seats in a Parliament, a party or combination of parties need to have 50% of the total seats plus one. So that would be 326 seats out of 650 under normal circumstances. But our Parliament doesn’t quite have normal circumstances. The Speaker doesn’t vote, for one thing, and there are going to be five Sinn Fein MPs who will have seats but refuse to take their place and vote in Parliament (don’t worry though, they all claim full expenses!). This means that the actually number of MPs who vote will be 645. So a majority will be 323 seats.

With that in mind, it is quite possible that the Conservatives will get 286 seats, Lib Dems 24 seats and the DUP from Northern Ireland 10 seats, along with UKIP 2 seats. This would give them 322 seats. The other parties, not including Galloway, but all of whom are from the left of the political spectrum, would then have 322 votes. This would give Galloway effectively the casting vote on the Queen’s speech. He’s spotted it too, commenting the other day that the establishment should be pretty worried about the prospect.

You would assume that he would vote with the ‘anti-Tory progressive alliance’ we keep hearing about. It is most likely that he would do so. But you may well have noticed that the small parties are lining up with their demands, and Galloway has his. They are above. What would happen if one side offered him what he wanted, and the other didn’t. Would he throw his demands aside just because the grouping who offered it were more right-leaning economically?