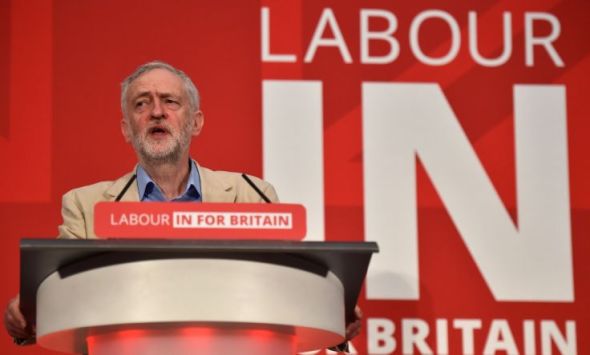 If you want to understand the Labour Party leadership’s strategy for the EU Referendum you need to understand that The Left has a hierarchy of hate. Fascists, racists, profiteering capitalists? All up there. But then there are Tories. They’re right at the top. “Vermin”, was the word that Jeremy Corbyn and John McDonnell’s political hero Aneurin “Nye” Bevan, used to describe Tory policy-makers towards the end of his time in Government in late 1940s. So it comes as no surprise that Corbyn and McDonnell are prepared first and foremost to do whatever they can to get out of the way and let the Tories hurt each other in this referendum campaign. That it could mean the UK leave the EU is of no real importance to them, given they have for the last 40 years wanted that to happen anyway.

Corbyn spoke very clearly and eloquently about the damage the EU does to Britain and ‘working people’ during his leadership campaign, but realised that with so many of his MPs supporting the case to Remain he had to drop his principles and pretend to support it too. The reason he could do that is because the EU is simply not near the top of his priorities, IN or OUT. Half-hearted doesn’t do his contribution justice. He has barely made a speech at all and is currently on holiday, three weeks before polling day. He has spouted some platitudes about ‘social protection’ and John McDonnell has held ‘conferences’ where he affects to talk about a ‘New, fairer Europe’ if we Remain. But everything you need to know about their priorities over this referendum can be gleaned from what they haven’t done, not what they have done.

It all comes down to hard politics. Labour insiders argue that such was the kicking the Party got from being seen to be “in bed” with the Tories during the Scottish Referendum campaign they couldn’t possibly risk doing the same on the EU referendum. This is an interesting approach, given the SNP are completely pro-REMAIN. You only have to look at the outcry at Sadiq Khan “sharing a platform” with David Cameron on Monday, something he had promised to do during his Mayoral campaign, to see how far this goes. Even Alan Johnson, the notional leader of the Remain campaign for Labour, won’t ‘share a platform’ with Cameron, which is, I feel, rather beneath this supposedly most grown up of Labour figures.

What it has led to is Labour’s contribution being almost invisible to the Remain case during the Referendum campaign being almost invisible, whereas their contribution on the Leave side has been more prominent, particularly in the case of Gisela Stuart, who has been visibly working closely with Michael Gove and Boris Johnson. This is the second political reason for being so quiet on the EU. Labour members are more Eurosceptic than their MPs and the Party is still lost as to what to do about the loss of votes and support to UKIP of working class Northerners in particular, who are concerned about the effect of immigration on their pay, job security and public services.

But ultimately, a bigger prize awaits. Labour’s silence is exposing Conservative divisions. The stories are about threats to David Cameron’s leadership, whether or not Britain votes to Remain. Corbyn and McDonnell know that if Britain votes to a Leave, Cameron is definitely out, and a close Remain result will probably persuade 50 MPs to put a letter to the Chair of the 1922 committee to trigger a leadership challenge. Labour supporters need to turnout in their drives to vote to Remain for this NOT to happen, and, in truth, Corbyn and McDonnell don’t really want that to happen.

Make no mistake, Cameron is the big prize for Labour. Much as they talk of his ‘neoliberal agenda’, ‘dismantling of the welfare state’ and ‘destruction of workers’ rights’, Labour leaders know that Cameron has always polled ahead of his Party with the public and his brand of Conservatism can win elections. If they can get him out now someone from the Eurosceptic side of the party will probably win the leadership election, pulling the party to the right, which ultimately helps Labour politically. Boris Johnson may win personal popularity contests but his visible wilting under questioning and debate coupled with no proof he has anywhere near Cameron’s skill at Party management could make him a far more ineffective Tory leader than many think. Such is the febrile disquiet in the Conservative Party at the behaviour of Cameron during this campaign that right now is Labour’s best chance of them electing as leader someone as unelectable as Prime Minister as Corbyn is.

If that happens, I can see Corbyn stepping aside and Labour  electing a leader the public might be more comfortable with in Downing Street. Amazingly, having spoken out against his party for 32 years and spoken out on issues he believes in for over 40 years, Jeremy Corbyn’s greatest contribution to Labour’s electoral chances may be from staying silent over the EU Referendum.