Why #Brexit was always coming 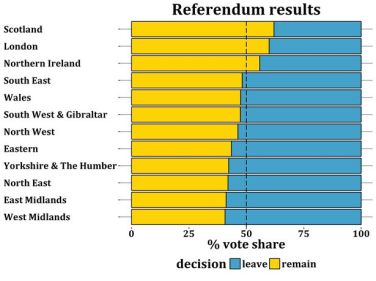 In May 1945 Winston Churchill stood on the balcony of Buckingham Palace receiving bigger cheers for his part in winning the Second World War than did the King. Within three months he had lost a General Election by a landslide on a 12 percent swing to Labour. No-one in Westminster nor the media had predicted it and even Joseph Stalin was preparing for a Churchill victory.

Many of those who voted for Clement Atlee’s government did so to make a point about the personal circumstances they found themselves in as the War ended, a War which had followed a depression. They weren’t looking to radically change the country, just do something that might change life for them. It may have looked like a sudden, decisive swing in voting behaviour, but after the conditions and living standards they had endured during the depression and then the War they had had enough and just wanted something else.

The decision by 17,400,000 Britons to leave the European Union was similarly not a sudden, decisive change swing. Instead it reflected conflicts over immigration, class, regionalism, nationalism and economic opportunity that have been bubbling in British society for a long time.

If you want to understand why Brexit has been coming for a long time, think about these people who Robert Harris and John Domokos met whilst filming “Anywhere but Westminster”, a video series about life far away from our London bubble.

Think about the builders in South Shields talking of how their hourly rate had come down by £3 thanks to new arrivals from Eastern Europe. Think about the mother in Stourbridge who wanted a new school her “our kids”. Think about the former docker in Liverpool looking at rows of empty warehouses and exclaiming “Where’s the work?”. Think about the cold resentments brewing for years in Peterborough, where people claim agencies would only hire non-UK nationals prepared to work insane shifts for risible rates. Think about the Lincolnshire heartlands, where communities built around agricultural work and food processing are cleanly divided in two, between optimistic new arrivals and resentful, miserable locals.

We in London don’t see all this. But Harris has. Brexit is the consequence of the economic bargain struck in the early 1980s. The postwar settlement had given most Britons security and certainties, the 1980s gave an economic model that served London and the more populous cities well, but left too much of the rest of the country to anxiously decline. That’s why Kensington and Chelsea were 69% remain, Camden 75% remain , Hackney 78% remain but Great Yarmouth was 71% leave, Castle Point in Essex was 73% leave and Redcar and Cleveland in the North East was 66% leave.

These are the ‘Brexit battle lines’ as set out by Fraser Nelson in the Wall Street Journal and they are similar to the socioeconomic battles being fought throughout many a Western democracies. It is the winners of Globalisation against its losers. Because politicians are always obsessed about the future, they tended to regard those left unprotected from the forces of globalisation as relics of the past. But the losers of globalisation are, by definition, as new as globalisation itself.

These people (and they ARE people, remember), have been ignored, then laughed at, then fought (labelled racist and lazy) and now they’ve won. They’ve won because a democratic tool was used that allowed their voice to be finally heard. We ignore EU election results, we laughed at UKIP’s four million votes getting ONE seat in the 2015 General Election. But who’s laughing now?

Well, you might say, my connection between July 26th 1945, when the election results that threw Winston Churchill out of office were announced, and June 24th 2016, when Britain’s intention to vote leave was announced, breaks down because 1945 ushered in a radical, revolutionary Labour government with a properly put together plan. This plan, to defeat the ‘five giants’ of want, squalor, ignorance, disease and idleness encompassed the modern welfare state and the NHS as well as a method of managing the economy to provide full employment. So those that voted for Clement Atlee’s government to change their lives actually had their lives changed for the better.

Meanwhile, those who voted leave to change their lives have found themselves with a rather terrified looking Boris Johnson and Michael Gove with no real plan for what to do next, and Nigel Farage and Daniel Hannan rowing back on as many commitments made during the campaign as they can.

There’s a reason for that. In 1945 globalisation hadn’t happened, and we weren’t in the EU so the UK government could act without outside influence (for instance, the way full employment was maintained would have been illegal under EU state aid rules). Only one of those circumstances has changed.

But I’m not sure many of those who voted leave actually care what happened next, they just knew what was happening before wasn’t working for them. So here we are.