How the British election system could come to Labour’s aid. 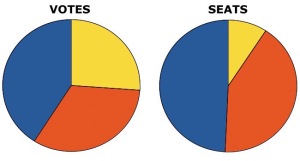 Predictions for Labour are dire. With no real position on Brexit, and one of the most unpopular mainstream Party leaders in history, some are predicting they could go beneath the 154 seats they got in 1935. But the British election system, combined with possibly the only sensible strategies for UKIP and the Liberal Democrats, could come to their rescue.

The British election system (the way that votes in an election are translated into seats) is called First past the Post. It is a ‘simple plurality’ system, which means that in each of the 650 constituencies all the winner has to do is get one more vote than the candidate in second place in order to win a seat in Westminster. This is why there can be such a difference between vote % and seat % in the general election.

You may remember for instance that UKIP achieved 13% of the popular vote in 2015 and only 1 seat (less than 0.02% of the total seats), whilst the Scottish National Party achieved 4% of the popular vote but 56 seats, which is nearing 10% of those in the House of Commons. The problem for UKIP was that to get seats you need your vote to be geographically concentrated, which means that you are better off having 5 seats with 30,000 votes and 95 seats with zero votes than having 100 seats with 10,000 votes in each, because in the latter case you are likely to win no seats at all.

This is why UKIP are apparently going to focus all their resources on five seats on June 8th, instead of spreading themselves too thinly like they did in 2015, when they won one seat and achieved 124 second places. They will have worked out which five seats they are most likely to win, and will put their ‘best’ five people there and hope they can up their Commons representation that way. They will look at the constituencies with the highest proportion of Leave voters, possibly combined with a Remain voting MP and other demographics that would fit the UKIP voter profile most and go for it.

Meanwhile, the Liberal Democrats may well do the same. When you have only nine seats you are best advised to concentrate on highly targeted campaigns only where you are most likely to win seats. So the Lib Dems will target the constituencies that voted Remain in the highest proportion and perhaps have a Leave voting MP (that might be you, Vauxhall!). There might be about thirty of these, which would re-establish a useful Parliamentary bridgehead.

How is this all relevant to Labour? Well, it is quite possible that Labour can retain a large majority of their seats even if their vote count falls. This is because those constituencies in which UKIP came second may see a large fall in turnout, as those who voted UKIP may not be motivated to vote, or they maybe even may go back to Labour.

The Lib Dems would need to be highly determined in their targeting in seats otherwise they may, with little geographical concentration of votes (the South West, where they used to have some geographical concentration, voted Leave), not be able to actually win seats, more likely coming second. They might have more success targeting Tory seats than Labour seats in many places, but what this means is that former Lib Dem voters in non-targeted seats. particularly if they have a Remain supporting Labour MP,  may in fact vote Labour,

The key thing is to remember that all Labour need to do is get one more vote than second place, and second place is about to get a lot fewer votes. So, it is quite possible, with fewer votes, and even with a lower percentage of votes than at any time since the 1920s, Labour could still win over 200 seats. Labour are blessed with significant geographical concentrations of votes, so it is quite possible they and a party like the Lib Dems could get similar numbers of votes, but they get over 150 more seats. If you don’t think that can happen, it happened all through the 1980s.

No ‘Tax lock’ would be sensible economics. »
« The falling pound has been good for British firms. Hasn’t it?