UKIP’s Brexit tests – any negotiation is too much 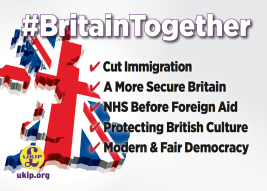 The launch of the UKIP manifesto was a chance for us to see them put the details on what being the ‘guard dogs of Brexit’ looks like. We now know that they don’t actually believe any negotiation is necessary.

This is different from what Labour, the Greens and the Lib Dems have done when their policy is to effectively encourage the EU to give us a bad deal, because we either won’t walk away (Labour) or we will put remaining in the EU on the ballot in any referendum on the deal (the other two).

UKIP work differently, setting out six tests that must be met for them to accept the Brexit deal. The feeling that there is no deal UKIP will actually agree is good enough remains (no pun intended). In fact, UKIP believe that there should be no negotiation anyway, and their vision of Brexit involves simply walking away.

Looking at what they actually say about Brexit, the manifesto begins by saying that the UK should not even be part of the Article 50 process. It calls that process a ‘trap’ to make it impossible for a country to leave the EU even after a democratic vote to do so, and to punish that country should it try to do so. Since Parliament has Sovereignty it can repeal the European Communities Act 1972 (the one that commits us to the EU institutions) right now (in fact, UKIP says it should have done so on June 24th last year, which is why they felt having a Parliamentary vote and the whole judicial process to invoke Article 50 was so wrong. To UKIP is was delaying something that shouldn’t have been required anyway. Of course, Britain did sign the Lisbon Treaty, and that commits us to use Article 50 to withdraw. If we don’t do that, then try to make any trade deal with the EU or others, they can point to our refusal to hold to Treaty obligations. Which is why I suspect UKIP would be happy with no trade deal at all with the EU, because that involves compromise.

The six tests that UKIP say they will use to stop the Government ‘backsliding’ into a soft Brexit, when what they want is a ‘clean’ Brexit are the following:

Legal – is Parliamentary sovereignty returned to how it was before 1972? Is it the superior legislature for Britain?

Migration – Does Britain have full control of immigration and asylum into the country?

Maritime – Does Britain have full control of who can fish in its waters up to 200 miles off the coast and halfway to any country nearer than that?

Trade – Does Britain have its own seat at the World Trade Organisation? Can it set its own tariffs? Has it left the Single Market and the Customs Union?

Money – Britain must not pay their ‘divorce bill’ to leave the EU. There should be no more money paid into the EU budget at all. Money should be returned from Britain’s share in certain EU wide investment funds (e.g. £9bn in the EU investment bank)

There are no compromises here, and I suppose that is understandable. UKIP have been fighting for this for its entire political life, and want to see it done properly. The reality may be that in a world of international cooperation and compromise it will not be possible to achieve all of them, but UKIP don’t believe in a world of international cooperation and compromise, so this list is consistent. The worry for those who would like a ‘softer Brexit’ is that to win the majority they want, the Tories are relying on UKIP voters. How much Theresa May will need to be influenced by this uncompromising shopping list remains to be seen.

The rest of the UKIP manifesto involves a commitment to fund extra spending on the NHS and other priorities without needing to raise taxes. This is by changing the Barnett formula (how Scotland, Wales and Northern Ireland are funded), using the money to be saved by not having to be paid into the EU budget, and reducing the commitment to fund foreign aid to 0.2%  of GDP. The latter is controversial, but UKIP have always argued that the country should focus on its own problems rather than other peoples’. Furthermore, the manifesto makes the argument that poor countries’ poverty can be solved by developing their ability to trade (held back by the rampant protectionism of the EU) than using aid.

There are other eye-catching policies and explanations for them, with a favourite being justifying the ban on face veils by saying that women need vitamin D to maintain their health. Whilst this policy is lampooned, it is consistent with what UKIP have always said, that it is necessary to help people who come to Britain to integrate, and doing so without facial expressions is very difficult.

The immigration policy is ‘one in-one out’, using an Australian-style points system to judge who comes in. The problem with this, obviously, is that if there aren’t many people going out, and a lot of highly skilled people want to come in, do we reject them?

Jeremy Corbyn on foreign policy: why you should read it before commenting »
« Time to reconsider what Jeremy Corbyn’s ‘support for the IRA’ means?