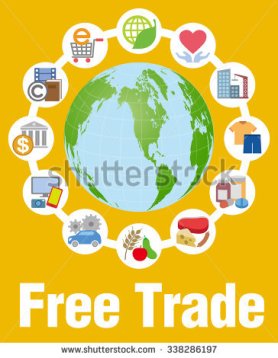 I wrote an article for Politics.co.uk last week (click here to read this) in which I pointed out that we cannot negotiate with the EU until we understand it. I explained, using political history, how the key point to understand is that the EU is a political project not an economic one, so we cannot expect the economic benefits of the EU without the political obligations. We found this out in the late 1950s when we tried to create a Free Trade Area called ‘Plan G’, involving the UK, other peripheral countries and the six members of the newly formed European Community. I received a comment on this article from a Twitter user that there are plenty of Free Trade agreements that don’t involve political obligations. This is correct, but not the type that Britain needs.

Free Trade Agreements are pretty easy to make for goods. In fact, if it were just about goods then countries would be lining up to give them to us, because Britain has had a trading surplus in goods (value of exports greater than value of imports) in less than 10 years of the past 200. We are simply not able to be self-sufficient, so even when we make something that people want, we have to import the raw materials for it.

Thankfully though, we are very good at exporting services. Administration, legal, financial, consultancy and retail services for instance. In the past 200 years we have had a trade surplus in services in 198 of them (apart from during wars). They are about 43% of our exports, and when we manufacture tangible goods we actually get money in from servicing and maintaining them.

What has this got to do with Brexit? Simple, when politicians talk about tariff free access to the EU they forget that tariffs for goods are already very low. In fact for agriculture and cars they are close to zero. The problem is getting rid of the non-tariff barriers, such as not being able to sell our products in a country unless it conforms to certain rules or not having your accountancy qualification or legal degree recognised as it is not recognised in certain countries. The EU’s average tariff on manufactured goods is 2.3%, but the cost of non-tariff barriers is almost three times that.

Margaret Thatcher thus led the creation of the EU Single Market in the mid-1980s. This harmonised regulations and got rid of non-tariff barriers (her civil servants found 287 of them). This meant that a good sold in one part of the EU was eligible to be sold in all of it. But this didn’t work very well for services, in that Architects can trade their services freely anywhere in the EU but not accountants. Yet even with these problems no other trading bloc has got anywhere what the EU has achieved in getting a true deal on free trade in services.

The problem is that making a Free Trade deal in services is fiendishly difficult. Let me give you the example of TTIP, which was a deal between the EU and the US that was opposed by many, including Jeremy Corbyn. Opposition to TTIP was based around many things including the fear of any competition being introduced into the health-care market – a big political no-no in this country where the NHS is almost a religion. Meanwhile, the UK has stringent rules on hormones in meat and genetically modified food, which any trade deal with the US would probably have to remove.

A further misconception about Trade Deals is that they are no different from Single Markets. But they are. This is because when you are harmonising regulations you need to have a supranational body (with higher legal authority than the nation states) to adjudicate disagreements between countries. Even Friedrich Hayek, one of the godfathers of the free market, admitted this was needed, due to the selfish instincts of trading nations (final chapter of ‘The Road to Serfdom’ if you want to see this). Whether this is the European Court of Justice or the World Trade Organisation is one thing. TTIP seemed to involve a dispute settlement body that allowed companies to sue governments for damages, which wasn’t popular to say the least.

A supranational body to resolve disagreements? Do you think Donald Trump will agree to that during negotiations for a US-UK trade deal? More to the point, will Leave voters accept it, given it involves giving up some national sovereignty to achieve the benefits of trade. Hold on, haven’t we already done that once?!

‘Writing off student debt’ – maybe the Corbynistas are right about the MSM’s fake news »
« Should we leave Euratom?