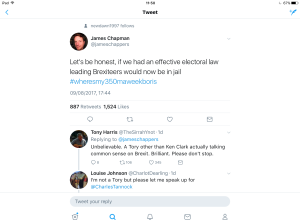 Regular Goldblog readers will know that I believe that, like with ad hominem attacks, when you have to lie it is because you have lost the argument. It is worse when you are a politician or a public figure, in which case your lie becomes more serious, particularly when using it to call for someone to be jailed. It devalues debate and is even more disappointing when you are in full knowledge that what you are saying is a lie.

In the determined ‘exit from Brexit’ campaign currently being led by James Chapman, now a PR executive but formerly the chief of staff to Brexit Secretary David Davis, Chapman is using the same lie as other Remainers use….namely that the £350m to the NHS claim must be a lie itself as it hasn’t appeared yet.

I have written before about this central part of the Leave campaign. In a detailed article (click here) I explained that the 350m isn’t a lie as it is the only figure that HAS to be paid as it is in the Treaty arrangements, whilst the rebate is voted on every 7 years as part of the budget arrangements (and the UK has often had to concede on issues to regain it), and the money that comes back as subsidies and grants are at the whims of an EU bureaucrat (subject to corporate lobbying and EU pet projects) rather than the UK Government, who are likely to possess better information on where it is most needed. Furthermore, it is a defendable claim that the ‘let’s spend it on the NHS’ is an illustration, not a commitment. In simple terms, there is not a chance for any legal case on this issue. But that’s not the point of what I am saying.

What I am fed up of is the amount of knowledgeable people claiming that the ‘350m to the NHS’ must have been a lie because it hasn’t appeared yet. A Prominent Remainer did it when he came to talk at my school, and James Chapman is the latest. See his tweet at the top of this blog. He actually has the temerity to start this tweet with ‘Let’s be honest’, before calling for the jailing of leading Brexiters. His hashtag is the problem. It is a lie.

It is a lie because James Chapman knows, as does the Prominent Remainers mentioned earlier and numerous others before them, that the £350m is an amount that is not available until we stop paying it into the EU budget. The earliest this can happen is at the end of the Article 50 process, which is scheduled to be March 2019. Even then of course as part of the transitional deal we will still have to pay some money towards the budget for a few years. But ignore that complication, the fact is that it was extremely clear what the Brexiters were talking about…that we currently pay an amount of money into the budget and eventually we won’t be, and we can use that money for whatever we want. In the future. Not now.

I am sure the likes of Chapman may well defend their lie by saying ‘well the Leave campaign lied, so why can’t I?’ To which my answer would be that they are attempting something very difficult, which is to overturn a referendum decision, and to achieve that they need to retain their integrity. The fact that they aren’t smacks of desperation, and I think it is beneath them. There are plenty of valid arguments that can be used to persuade the British public and Government there should a chance to think again, but the use of lies isn’t one of them.

A view from Iowa on why people voted for Trump »
« The real Brexit Debate: Fairness between Consumers and Producers

10 thoughts on “#Wheresmy350mBoris – the lie that suggests Remainer desperation?”