Like Thatcher in Bruges, the stakes are high for Theresa May’s Florence speech 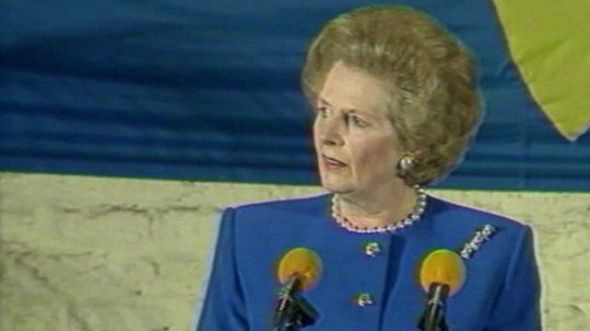 As Theresa May prepares to make a speech in Florence setting out the UK’s position and offer on Brexit, she may be aware of the historical importance of such texts in shaping the nature of Britain’s relationship with the EU. In a way, May’s speech starts to close the circle on what Margaret Thatcher started with her ‘Bruges’ speech in 1988. That particular piece of oratory inspired the creation of the ‘Bruges’ group, a Tory faction pushing to either radically reform or leave the EU.

Ominously for Theresa May, Thatcher’s Bruges speech cemented in her then Foreign Secretary Geoffrey Howe’s mind that their differences over Europe were beginning to be untenable, leading directly to his involvement in her unseating as Prime Minister. Rumours abound Boris Johnson’s reaction to May’s speech might do the same. The problem is that managing the EU and managing the Conservative Party may be incompatible. So the stakes are pretty high.

The Bruges speech was so named because it was given at the College of Europe in Bruges. It was a response to the constant stirring, by European Commission President Jacques Delors, of the hornets’ nest of Euroscepticism that had been building up in Margaret Thatcher’s mind over the past decade.

It had started in July 1988, when Delors made a speech to the European Parliament in which he predicted: ‘In ten years, 80 percent of economic legislation – and perhaps tax and social legislation – will be directed from the Community’. He went on to say that ‘we are not going to manage to take all the decisions needed between now and 1995 unless we see the beginnings of a European Government.’ It is understandable that his chef de cabinet Pascal Lamy, who had written the speech without the line but seen Delors add it in spontaneously, reported that “I buried my head in my hands as I heard Delors make this claim. I knew just what a disaster it would be around the national capitals of Europe to be told that the work of their governments and parliaments in passing legislation would disappear to be replaced by European law-making.”

Although we know now that national parliaments still decide most of the key laws that affect their population, Margaret Thatcher was concerned that  Delors was belittling the importance of the House of Commons as the only source of law in Britain.

This concern turned to anger when Delors addressed the annual conference of the Trades Union Congress in September 1988. This was the moment when the Labour movement moved from Euroscepticism to support of the European ideal. Thatcher had won her third election in 1987 with a majority of 100, so the unions in particular were concerned about whether there was ever going to be a parliamentary means to achieve social and employment protection in the face of Conservative resistance. This gave Jacques Delors an open door to their hearts and minds. He almost ran in through that door.

Delors’ speech was on the whole pro-competition, market economics and capitalism. But it also suggested that economic benefits should be maximised while minimising the social cost. ‘The internal market should be designed to
benefit each and every citizen of the Community. It is therefore necessary to improve
workers’ living and working conditions, and to provide better protection
for their health and safety at work.’ This meant that Europe could have a social
dimension which would mean:
• The establishment of a platform of guaranteed social rights, containing general
principles, such as every worker’s right to be covered by a collective agreement,
and more specific measures concerning, for example, the status of temporary
work.
• The creation of a Statute for European Companies, which would include the
participation of workers or their representatives…
• The extension to all workers of the right to lifelong education.

Delors received a standing ovation. Chants of ‘Frere Jacques’ ran around the hall, reducing him to tears.

But Margaret Thatcher was appalled. She had requested a paper from officials spelling out in precise detail how the Commission was pushing forward its frontiers into new areas of culture, education, health and social security. Thatcher reported in her autobiography that –

‘It set up ‘advisory committees’ whose membership was neither appointed by,
nor answerable to, member states … It carefully built up a library of declaratory
language, largely drawn from the sort of vacuous nonsense which found its
way into Council conclusions, in order to justify subsequent proposals. It used a
special budgetary procedure, known as ‘actions ponctuelles’, which enabled it to
finance new projects without a legal base for doing so. But, most seriously of all,
it consistently misemployed treaty articles requiring only a qualified majority to
issue directives which it could not pass under articles which required unanimity.’

This is the background to her Bruges speech. She wanted to set out her concerns about the direction of the EU and to advocate a Europe built around sovereign states. In the speech, she argued that the Treaty of Rome in 1957 (that set up the European Community) had been intended as a charter for economic liberty. This was being undermined by the development of monetary union, proposals for a common currency and for a social Europe, all of which concentrates powers at the centre. She then made this famous remark: ‘We have not successfully rolled back the frontiers of the state in Britain only to see them re-imposed at a European level, with a
European super-state exercising a new dominance from Brussels.’ That said, she did insist that Britain’s destiny is to remain in Europe as a part of the Community. For instance, she called for a stronger European defence and foreign policy.

The Bruges speech was ultimately the first major attack by a head of government involved in the European unity project on the sharing of sovereignty and supranational government. She wanted to push instead for ‘…willing and active cooperation
between independent sovereign states’. This, then, is not an anti-Europe speech, but a repudiation of the direction of European cooperation. Former French President Charles de Gaulle would have liked it. Other European heads of governments certainly didn’t.

Someone else who didn’t like it was her Foreign Secretary Geoffrey Howe, who argued that Thatcher’s solution to the problems she had identified was ‘to misunderstand or misrepresent the Community as it already existed and to inhibit its future in defiance of the texts that we had ourselves negotiated’.

Howe had been left ‘shaking with anger’ in June 1987 when Thatcher had been the only Head of Government to vote against a package of reforms brought forward by Jacques Delors described as a ‘European Social Area’ and introduced in a speech called ‘Making a Success of the Single Act’ (the Single European Act had effectively created what we know as the Single Market, and Thatcher had been heavily involved in its creation). From this point, relations between Thatcher and Europe started to almost irretrievably break.

The same was happening to relations between Margaret Thatcher and Geoffrey Howe. The Bruges Speech was therefore a step on the way to his final Parliamentary defenestration (click here to watch) of his former friend and political partner that contributed so much to bringing her Premiership to an end in November 1990.

Theresa May’s Florence Speech – shared history, challenges and future »
« A new political party doesn’t have to win seats in Parliament to be successful