Is it time for Theresa May to call the DUP’s bluff on Brexit? 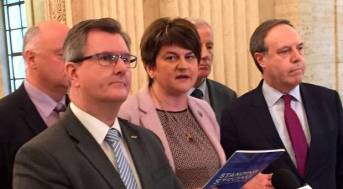 In 1968, Labour Prime Minister Harold Wilson warned the trade unions that if they didn’t accept his relatively modest changes to trade union legislation he would ‘leave them to the Tories’. That warning turned out to be significant, because eventually Margaret Thatcher turned up and used the full force of the law to make the unions wish they had been more accommodating to Wilson. I tell you this story because at some point Theresa May may have to turn to Arlene Foster and the DUP, who are propping up her government but will operate an effective veto over Brexit arrangements around Northern Ireland, that she may need to leave them to Jeremy Corbyn. That may sharpen their focus.

I feel like it is worth explaining what happened yesterday to Britain’s plans to leave the European Union. Theresa May went into a lunch meeting with European Commission President Jean-Claude Juncker to firm up the deal that both sides would accept before moving onto trade talks. She was able to allegedly make an offer on the ‘divorce bill’ (about £50bn), an offer on EU citizenship rights in the UK (settled status with possibility of referral to ECJ if rights in dispute) and the border between Northern Ireland and Republic of Ireland (some regulatory convergence kept between the two so that there is no need for a hard border). The details seemed to have leaked of this deal and next thing we knew Arlene Foster (leader of the DUP, who are propping up May’s Government with their 10 seats) had come down the steps of the NI assembly and announced that they would only accept a deal which didn’t differentiate in any way between Northern Ireland and the rest of the UK.

Next thing we knew, May and Juncker were appearing at as friendly a press conference can be if talks have failed. They would keep going to try to find an answer. But the chaos that has ensued could derail Brexit talks completely.

In hindsight, it is difficult to see why the DUP could have done anything else. They believe first and foremost that NI is part of the UK. Giving NI a different deal as we leave weakens that bond, and in fact could bring Irish reunification closer. Nicola Sturgeon of the SNP was immediately onto the media pointing out that if NI gets a different deal then so should Scotland. Carwyn Jones of Wales wanted the same thing. Sadiq Khan then asked for a different deal for London. At that point, any deal with the EU essentially fell apart.

Under the terms of the Good Friday Agreement between Nationalists and Unionists, it was agreed that any change in the constitutional arrangements of Northern Ireland would need to be subject to a referendum. Giving the country a different status vis-a-vis the EU to what the rest of the UK has is a pretty significant change in its constitutional arrangements. That said, sources close to the deal actually about to be agreed say it is mainly in the areas of agriculture and energy and transport, which are specific North-South border issues, and was about ‘alignment’ rather than actually seeing NI remain in the Customs Union and Single Market. Foster and the DUP decided that this deal counted as ‘regulatory divergence’ from the UK, and they weren’t having that.

One could argue that Foster and the DUP are overplaying their hand, effectively granting themselves a veto over a Brexit deal. Yet the political reality is that the DUP have been put in a position of ridiculously overbalanced power by Theresa May’s wish to stay in Downing Street. They almost have a veto on everything. At some point, May may need to call the DUP’s bluff. If they decide to leave the ‘deal’ they are in with the Conservatives, a general election may have to be called, and if that happens right now, Jeremy Corbyn could win. The DUP have to decide what is worse, being flexible over this concept of ‘regulatory divergence’ or having Jeremy Corbyn and John McDonnell – both openly sympathetic to the Republican cause all their lives, in Downing Street.

In an ideal world, the UK wouldn’t have agreed to the ridiculous demand that sufficient progress be made on the Northern Ireland border issue before talks of a future deal went forward. It is impossible to make progress on the issue until an idea is gained of what the future relationship between the UK and the EU is.

Ultimately, the biggest problem is this – Referendums are supposed to solve simple yes and no issues. There was barely a mention of Northern Ireland and its border with the Republic during the 2016 referendum campaign. The option of ‘Leave – but no hard border with Republic of Ireland’ wasn’t on the ballot. Our relationship with the EU is and always has been a complex business. There are no simple answers to this. Don’t bet too much on any outcome.

2 thoughts on “Is it time for Theresa May to call the DUP’s bluff on Brexit?”