The Green Party Manifesto – changing our lives to save them? 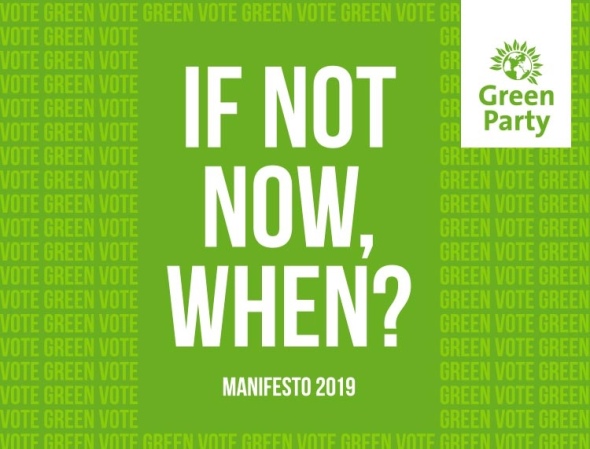 I’m reading the party manifestos so you don’t have to. Today, it’s the Green Party.

I love the Green Party Manifesto. It is genuinely one of the things I most look forward to in an election campaign. It is properly radical, highly ambitious, and most importantly it is optimistic that we can all live a ‘better life’. They didn’t let me down.

At the start of it, however, it a rather pessimistic and stark question: ‘If not now, when?’. Like the Lib Dems, the Green Party is convinced that if the UK doesn’t become carbon neutral by 2030 (in the next decade), we all doomed.

However, the difference is that the way the Greens will get there is to fundamentally change how this country works. There is no tinkering at the edges, no beating around the bush. It’s really quite refreshing.

There are basically five main commitments in the manifesto:

> A Green New Deal to tackle the Climate Emergency and deliver social justice – this will cost £100bn, mainly funded by borrowing. The idea is to change how we use energy from linear (extract, use, dispose) to circular (generate, use, use again, use again and so on. There is little doubt there needs to be a huge amount of money spent to generate the scale to change to renewable energy economically. Well, this IS a huge amount of money.

> A UK that remains in the EU, to transform it for the better. This is not just a simple rejection of the 2016 Referendum vote. This is so that the Greens can lead a revolution in how the EU uses its supranational power, which makes sense since the environment has no borders. Rather than limit its competencies, the Greens want the EU Parliament to be able to initiate Europe-wide legislation, which they regard as more democratic, given the EU Parliament is actually elected.

> A democratic renewal, that gives everyone a voice. This, unsurprisingly, means a change from the First-Past-The-Post electoral system that has sidelined the Greens for years to a proportional representation system. They also want to include votes at 16, give local councils more power and replace the Ministry of Defence with a Ministry for Peace.

> An economy for tomorrow that has improved quality of life and wellbeing at its heart. The centre of this is the ‘Green UBI’, a universal basic income paid to everyone, with adults getting £79 a week and pensioners £178 a week. This replaces most means-tested benefits. There will also be a living wage of £12 an hour. Meanwhile, the maximum wage in any organisation cannot be more than ten times that of the lowest paid worker, and the largest bonus no more than the salary of the lowest paid worker.

> A revolution in tax & spend to spread wealth fairly and fund the Green New Deal. This is based around a Land Value Tax (LVT) which would be based on the value of land and the property on it, which would replace Council tax. Corporation tax would rise to 24% from 19%. Meanwhile income tax, inheritance tax, capital gains tax, National insurance and dividend tax would be merged into a consolidated income tax, which the Greens think would save about £20 billion as tax loopholes would be closed.

The Greens aren’t going to win this election. But their policies have, for many years, ended up in others’ manifestos. Sadly, parties likely to get into power are not going to level with the public what actually has to be done if climate change is to be stopped. So the Greens, once again, have done it for them.

The Liberal Democrat Manifesto – the last gasp for a party that has run out of ideas? »
« Johnson vs Corbyn #ITVDebate post-game…unlikely to have changed anyone’s vote – apart from to other parties

One thought on “The Green Party Manifesto – changing our lives to save them?”