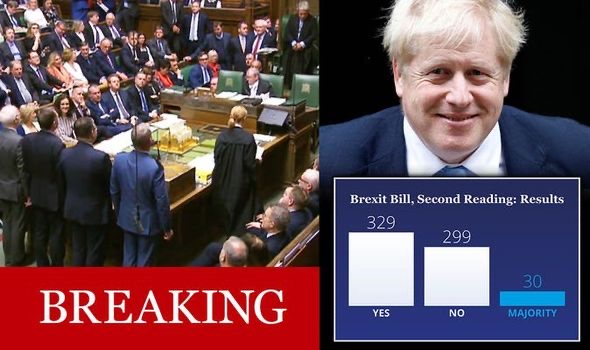 Boris Johnson’s deal passed its second reading in Parliament. Yet the Conservative campaign is centred around Parliament blocking Brexit. Odd.

In late October something unique happened. For the very passed time a Brexit deal passed a stage in Parliament. Not by a small amount either.

Boris Johnson’s quickly put together Brexit deal passed its second reading by 329 to 299, with every single Conservative MP voting for it, some of those whose whip had been taken away and some Labour MPs.

The reason the UK hasn’t left yet is that this vote was followed by a vote on the programme motion. This is the timetable for the passage of the remainder of the Bill.

The Government wanted to try and get the entire Withdrawal Bill through in three days, despite the Bill and accompanying deal containing the type of detail that months of scrutiny would be justified. So it was little surprise that the Government lost by 322 to 308.

At this point Boris Johnson paused the Bill. He didn’t have to, but he did. He could have out through a more sensible programme motion, but he didn’t.

Why? Because he had promised the UK would leave the EU by October 31st ‘do or die’. Knowing he couldn’t do that, Boris chose to go for a General Election, on the basis that a vote between ‘people and parliament’ was now necessary.

Except it isn’t necessary. Because Parliament had shown itself prepared to vote for a Brexit deal. So with patience and hard work the UK could have been leaving the EU on December 12th instead of having a General election.

But Boris doesn’t do patience and hard work. It’s a battle he couldn’t be bothered to fight as he has a bigger war to win. An election giving him a majority allows him to make the trade deals and the future arrangements with other countries that will make a massive difference over the next few decades.

So don’t be fooled by Boris’s claim that he didn’t want an election but was forced into one as Parliament blocked Brexit. They didn’t. This claim is as typical of this election as the one where people who voted every time for Theresa May’s Brexit deal and called ‘Remoaners’ and those who voted against it (literally blocking Brexit) are apparently heroes of the people.

Boris paused Brexit at the very moment Parliament stopped blocking it. Don’t let him forget that.