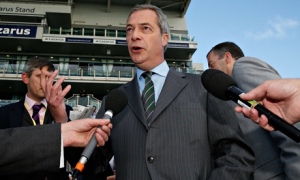 Just before the UKIP conference, the Labour Party released a press statement pointing out that UKIP were “more Tory that the Tories”. This signified one thing. Labour are officially worried about UKIP.

No wonder really, UKIP very carefully parked their car on Labour’s lawn during their conference, which could have been in what until recently were regarded as their heartlands of rural and seaside towns, but instead they went to Doncaster – to Ed Miliband’s constituency in fact, as a signal that they themselves believe that Labour should be worried. Yet their policies reveal a little bit more about where we should really be positioning them.

There are many lenses through which to view these policies. But the question you should ask yourself is – are these the policies of a party that is readying themselves for power – in particular the compromises that being in power entails, or are these the policies of a party that is throwing some meaty bones to certain groups of voters in order to get enough votes to win some seats in some carefully selected constituencies. Let’s face it – their aim is to get some sort of foothold in the House of Commons. They will get some through the defections of Mark Reckless and Douglas Carswell, but to really break through they need to win some seats off their own backs. Not just Nigel Farage in South Thanet either.

Here are some bones to those on the right-wing: They have pledged to scrap inheritance tax (you pay 40% on every penny’s worth of assets left to you above £325,000). They have decided to make sure foreigners have medical insurance (related to their belief that they are coming over to clog up the NHS), and they want to lower the higher rate of tax to 35% and raise the personal tax threshold, the amount you earn before paying tax, to £13,500 (at a cost of £12 billion, paid for by pulling out of the EU and slashing the foreign aid budget).

I’m going to suggest that the following policies throw a bone to some of the Labour voters they are after. These are the lower-income ‘working class’ voters, who worry about their future. I would argue that they are interested in the UKIP promise to slash immigration by almost 80% (by bringing in an Australian-style points system to assess each one). I would also argue that the 25% rate on VAT for ‘luxury goods’ which include  shoes costing more than £200, handbags more than £1,000 and cars more than £50,000, is aimed at these blue-collar former Labour voters. It is aimed at what Nigel Farage believes are foreign people coming over to shop here, but also, simply it is aimed at raising money from the from the wealthiest.

There is a rumour that a backbench Labour MP is seriously considering defecting to UKIP. That would cause a political earthquake with a richter scale that dwarfs the quite predictable moves from Carswell and Reckless. I predict that through defections, UKIP will reach about 10 MPs in Parliament next May, but these policies are about trying to get some ‘home-grown’ MPs in. I personally can’t imagine voting for them – but that’s why UKIP aren’t campaigning in West London!!