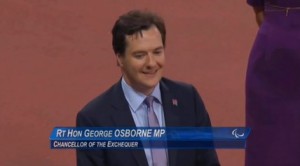 Have a look at George Osborne’s face in the picture above. It was taken at the very point that he was being booed by 60,000 people when he came to present some medals at the Paralympic Games in London 2012. He is not smiling because he is being booed, he is smiling because he felt that it was very important for the sake of his children, who were in the crowd that night, that he put a brave face on it.

In an excellent article (to read click here) in the Mail, he said “I just thought: I’ve got to put a brave face on it. The thing going through my head was my children. I wanted to explain to them: Look, I take difficult and unpopular decisions sometimes and people don’t like them and we live in a country where people shout at and boo their politicians if they don’t like it. It’s better than the alternative.”

Osborne went on to explain that the experience made him take a hard look at his public profile. He realised that he was being booed because the policies that he was driving were seen as adversely affecting the disabled.  One was the ‘bedroom tax’ (which was asking some disabled people to pay for the spare room in a flat that had been specially adapted for them) and the ‘incapacity assessments’ in which everybody receiving incapacity benefits had to attend an interview, conducted by an outside consultancy (Atos), which had been found to be making some judgements that were stripping incapacity benefit from many who desperately needed them and were simply not capable of work. But whilst Osborne knew that his decisions were unpopular, and he might not be able to help that – he felt that he could benefit from getting up and around the country to explain his policies better. Since then, barely a week has gone by without seeing Osborne out and about in a high-visibility jacket touring somewhere.

But the story highlights something about politicians that is too easily forgotten. They are human beings. They are fathers, mothers, husbands, wives, daughters, sons, brothers and sisters. I looked at George Osborne’s face when he was being booed at the time and saw someone that just looked embarrassed for himself. I now realise that he was far more worried about what his children were thinking. It’s at times like those when people like Osborne (who, at 43, still has a long future in Politics), must wonder why he puts himself through it. You may not agree with his policies, but politics needs people with the intellectual capacity of George Osborne, and we should be careful that our habit of making the political personal doesn’t force him out.