Why are the Conservatives so happy about a set of policies that victimise the poorest so much? 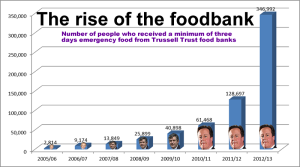 As the smoke clears from the pep rally that this week’s Conservative party conference basically turned out to be, a group of people stand alone, ignored, misunderstood, and alienated. Unsurprisingly, those in our society who exist on the lowest incomes and on benefits were cast a bit further adrift by the policies announced over the last few days, and it’s important to look at how and why.

On Monday it was announced by George Osborne, having been heavily trailed by the press, that the benefits cap would be reduced from £26,000 to £23,000, that there would be a cap throughout the next Parliament of 1% on the increase in benefits, and that people between the ages of 18-21 would be given 6 months to get a job before their benefits would be severely reduced, and would also not get access to housing benefit.

All of this was presented in what has been and has returned to the classical liberal Thatcherite vision of a group of people who need to be told that a life on welfare is no longer a choice. Looked at from one direction, it seems that saying that it is no longer possible for a household to earn more from benefits than the average wage may seem “fair”. From that direction telling young people that the option of leaving school to a life on benefits and a free home is also no longer available, that they will only receive support from the state if they are learning or earning makes economic sense in our fight to stop people going straight into lifelong dependency. The 1% cap on a rise in benefits may also look sensible, given there is also a 1% cap on the rise in public sector pay at the moment. All that may make sense from an economics point of view.

But when you live off benefits, when you are paid a pittance, when you worry about where the next meal is coming from, when you are sending your children off to school in old, torn clothing, hungry…you don’t see things from an economics point of view.

A 1% rise in benefits –  But food, energy, water, clothing and housing prices rise by way more than 1% every year so what good is that to you?

Telling a young person they have to learn or earn to get housing or benefits –  What if there is nothing near where they live? Does that mean they just have ‘get on their bike?’, forget family ties and protection and go elsewhere? Really? What help are they getting?

But those whose concerns were ignored by the Conservative party the past few days? They don’t vote. They are young, or poor, so they are powerless.

For those people the state should be an enabler. Left to themselves, under some of the policies announced, rather than giving them the freedom to aspire to greater things by releasing them from dependency, we might instead be giving them freedom to starve. In other words, you try going to a job interview when you haven’t eaten for days so your children can eat.

Big business and the middle class may cheer these tax cuts, but the only business likely to be thriving as a result of the cuts to welfare that are going to pay for them are food banks.

TTIP..the devil is most definitely in the detail »
« Cameron delivers a speech aimed at tightening the Tory defence of Downing Street