TTIP..the devil is most definitely in the detail 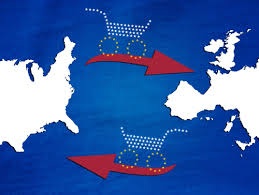 The Transatlantic Trade and Investment Partnership (TTIP) is a new free-market trade agreement between the US and the EU. At some point, it will get agreed, and will cover many billions of dollars of trade between these massive continents and this will impact the lives, and livelihoods of millions. Some studies are claiming that it will make every family in the EU about £500 better off a year. Yet it is being opposed, with increasing intensity, by a coalition of groups, including trade unions, and other campaigners. Why?

The key aim of TTIP is not to reduce tariffs (taxes on imports), because they are very small anyway between the US and the EU. They are aimed more at Non-Tariff barriers, which are rules and regulations that can make it harder for firms to sell goods or services in each others’ continents. This could be applied in particular to car safety, where having the same requirements and systems would save a lot of money for car companies, and therefore consumers. Apply that also to safety standards in a range of products from food to computer games, and you have savings of over £100bn to year to each continent.

The problem is that the real benefits are likely to accrue to American firms. Firstly, because they are just more competitive than EU companies, meaning that less barriers to entry for US firms could result in up to 1 million EU workers losing their jobs as EU firms would be destabilised. Secondly, the intensive lobbying of US firms has affected the regulations that US firms have to adhere to. These include, just in the food industry, restrictions on the use of growth hormones in meat, antibiotics in animals, genetically modified organisms amongst many other rules. Consumer groups, farmers, trade unions and environmental groups point out that many of the regulations that the EU has are there for a good reason.

But then there is the most controversial aspect of TTIP – the “Investor-State Dispute Settlement” (ISDS). This is aimed at protecting investors who have been willing to put their money into uncertain markets. Should a foreign government misbehave, or seizes their assets, they can seek redress in international arbitration courts. Put another way, ISDS allows companies an unprecedented power to sue governments if they don’t like their policies.

TTIP is not a bad idea. At a time when the US and the EU are justifiably worried about the challenge from China, lowering the costs of trade between them is a good idea. But the devil will be in the detail.

The beheading of Alan Henning…a sign of fear or a piece of kamikaze? »
« Why are the Conservatives so happy about a set of policies that victimise the poorest so much?