Tesco and the changing market structure in the groceries sector 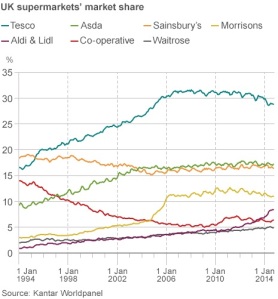 The table above tells the story of a company that is on the way down. After years of dominance in the supermarket sector, the market share of Tesco has gone under 30% and looks like it could fall below 25% soon. This is significant because if that happens it will no longer be regarded as a “statutory monopoly”.

Looking at the table, you can also see the fluctuating fortunes of Asda and Sainsburys, with the former having been ascendant in the last few years thanks to their reputation for low prices. Talking of low prices, look at the market share of Aldi and Lidl, who are growing fast. Meanwhile, Waitrose happily bumbles along near the bottom of market shares but it won’t be something they are bothered about given their strategy of attracting the higher income consumer.

This is a significant graph, because it shows the extent to which the market structure of the supermarket industry is changing. There is, quite simply, more competition, and in the food market, given food is a necessity, this should be a good thing. That is true, as long as in the fight for market share quality doesn’t suffer too much (such as horse meat in lasagne etc etc).

Going back to Tesco, it is worth looking at the reasons for their fall. First of all, they are no longer seen to be the leader for price or quality, which gives people less reason to shop with them. Online shopping has also hit them hard. Tesco were quick to market with online shopping, and it made a big difference to them. But what online shopping has done is left customers now with a need to ‘top-up’ their groceries almost daily, and for that they want somewhere accessible, which means smaller. So Tesco’s huge hypermarket stores are seeing a lot less business. Tesco seems to be being slow to adapt to these shifts, and it is costing them.

Sales are down 4.6% on last year, profits down too. It seems that in desperation to meet market expectations, some accounting shenanigans have been going on, with profits allegedly repeatedly overstated. Tesco had been doing deals with suppliers over promotions, which is commonplace for supermarkets, but it appears Tesco had been booking returns (putting them in the accounts) from those promotions too early, while pushing back the costs to later accounts. The regulatory investigation into this will take a while and could result in a serious fine for them.

You would think that Asda and Sainsburys would be chuckling at Tesco’s misfortune, but they are not. Their sales are falling too. The beneficiary of all this should be us customers, and it was recently reported that the cost of the average food basket has gone down for the first time in a long while, which can only be good news.

This is a market to watch.

EU must be having a laugh with your ‘prosperity surcharge’ »
« £1bn a year in benefit fraud…£34bn a year in uncollected tax – which would you target?