Time for Ed Miliband to show he understands Profit. 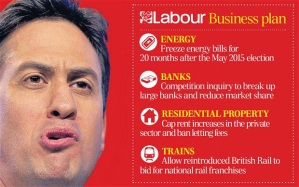 The debate around Labour’s relationship with the business community at the moment is about many things. One could say it’s about a bunch of very rich people running scared of a party that it likely to tax their income and property more. One could say it’s about a bunch of capitalists running scared of the extra regulation that Ed Miliband has talked about in many different areas. It’s actually not really about any of those. It’s far more about a feeling, shared by people in and out of the business community, that this Labour Party has no concept of any positive contribution that private sector profit makes to our economy. That Miliband doesn’t ‘get’ profit.

It didn’t help that the debate started last week with an attack on Miliband and Labour by Stefano Pessina, the Chief Executive of Alliance Boots. Pessina used the term ‘catastrophe’ to describe an incoming Labour-led government. Pessina, unhelpfully, is an Italian billionaire who lives in Monaco and runs a company that last year avoided £1 billion of corporation tax. This meant that Miliband and friends could very easily ‘play the man and not the ball’, by pointing out the above and not actually answering any of Pessina’s challenges.

Then Lord Stuart Rose, the man who revived Marks & Spencer from the doldrums in 2004, expressed his concerns that the rises in corporation tax that Labour were talking about (taxes on company profits) would result, because they would reduce investment, in shuttered shops on high street and more unemployment. Again, instead of answering this, Labour attacked the man again, pointing out some of the areas in which Rose hadn’t done so well when in charge of M&S.

Further problems arose when Ed Balls, the Shadow Chancellor, asked on Newsnight to name a single business leader who supported Labour, couldn’t do it successfully, ending up saying “Bill Somebody”, instead of Bill Thomas, the former head of EDS, which became David Cameron’s taunt to Miliband in PMQs the next day, that Labour’s entire political strategy is to ‘bill somebody’.

More arrived, as Luke Johnson, the serial entrepreneur who created Pizza Express, jumped in with articles and interviews in which he expressed concern that so little of Labour’s MPs and current Parliamentary candidates had any experience outside the public sector. It is very difficult to understand the challenges for people who create businesses if you have never created one. It is very difficult to understand the challenges of generating the profit needed to create jobs and invest in new technology, innovation and increased productivity if you have never had to actually generate a profit to employ people. I always think here of a friend of mine who runs a company and who has a picture of his employees’ children on his office wall to remind him who his decisions end up feeding. Labour’s politicians, having never been in this position, seem not to understand.

Too often, they see the quantum of profit rather than the actual profit margin. When you are an energy company, £4bn profit seems a lot. But for a company that big it is only about a 4% profit margin, which is less than supermarkets. Now, I’m not saying the energy companies are perfect, but they DO need to generate profit in order to invest in increasing capacity and in more environmentally friendly energy, and Miliband’s constant hounding of the industry is discouraging that investment.

Yet, it’s all very well me saying that profit is important, but where I do see Ed Miliband’s point is in his distinction between responsible and predatory capitalism. Also, his observations that the profits generated are being distributed differently than before. Put simply, wealth creation is happening, but it is being created for the owners of companies far more than ever before, a point made by Thomas Piketty in his book ‘Capital’ last year. Those who own capital are keeping the fruits of their entrepreneurship and those who offer their labour are receiving far less than before. Profits are creating jobs, but they are very low paid jobs. Many profits from the labour of employees in this country are going abroad as the free movement of capital in the EU means some of the ‘commanding heights’ of the economy are owned by EU companies. This freedom of movement of capital is often ignored as an issue as it is obscured by the debate over freedom of movement of labour. Meanwhile, wealth creation isn’t resulting in a rise in tax revenue for the government either, as income tax revenue is falling due to the low wages, and corporation tax is too easily avoided by the larger, transnational companies that dominate this country’s economy.

My point is that Ed Miliband is often on the right side of issues, and points out problems that David Cameron shies away from. But his policy prescriptions are too populist, show little understanding of the purpose of profit, and thus are too easy to dismiss by those in business who he most frequently attacks.

So, my advice for Miliband, who has, after all, a degree in Politics, Philosophy AND Economics, is to give a speech over the next few weeks in which he shows a proper understanding of the benefits of the private sector, and the benefits of them producing profit.  He has a trump card in his pocket, which is that he is not playing politics with the EU at the moment, as he is not offering a referendum on our place in it, and businesses by and large want to remain in the EU. Mostly though he needs to show that he has some policy ideas that help MORE profit to be made, not just to restrict it, and then redistribute that restricted profit. It’s a fine balance, but he is on the wrong side of it at the moment.

Government’s policies favour older people for a good reason…and it’s not what you think »
« FPTP encourages Greens to be unrealistic in their demands.

3 thoughts on “Time for Ed Miliband to show he understands Profit.”