Why tax credits can be the wrong type of incentive 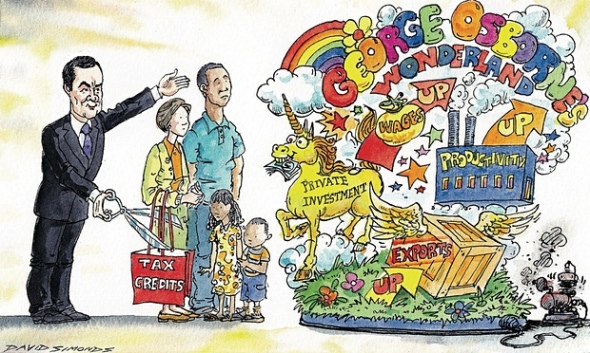 Tax credits can remove the incentive to improve your skills and productivity so you earn a higher wage on your own merits. A long term ‘higher wage, lower welfare’ economy should thus cut tax credits.

First of all – read the whole of this before you make a judgement. I owe this blog to three students in one of my Politics classes. I challenged the class to help me find an argument for the tax credit cuts that George Osborne has been proposing. I was frustrated that my attempt to always present a politically balanced view of every issue was not possible on the issue of tax credits as I just couldn’t think of a proper argument for them (but I have thought of many arguments against – click here to read). Then the three students spoke up and between them gave me this thought – tax credits can be the wrong sort of incentive.

So here’s how the argument goes. I have been saying that tax credits give people who are on low incomes an incentive to not live off benefits and to work instead, as even though they might earn low wages their incomes get bumped up by the government to a level they can live off. They are part of a coordinated strategy to “make work pay” – put together a higher minimum wage, a higher minimum income tax threshold – the amount you earn before you pay tax and add tax credits and someone earning a small wage can put food on the table. So, I thought it was a no-brainer to say that tax credits provided an important incentive to work and they shouldn’t be lowered because the recipients might as well live on benefits.

I had banged on about this for a few weeks and then finally three students spoke up. What they said and did was a fine example of the “judo debating” technique I had always said could be most effective in winning an argument. They took my argument’s biggest strength – that tax credits provide an incentive to work, and turned it into a weakness – pointing out that tax credits also provide an incentive not to improve your productivity.

To understand the significance of this point – I should explain a little bit of Labour market economics: To employ a new worker, a company thinks about the additional revenue (money) that worker will bring into the company. This is a mixture of their productivity (how many units they can make/sell) and the price those units can be sold at. The economic concept here is ‘marginal revenue productivity’ (MRP) – which is the additional revenue to the company of hiring an extra worker. Put simply, if MRP of that worker is higher than the wage, a company should hire them – if it isn’t, they shouldn’t. In some professions, the MRP could be represented by the quality of the work they do, but the concept remains the same.

What tax credits do is to take the worker’s marginal revenue productivity out of the equation when a firm hires a worker. Tax credits mean that a firm can pay minimum wage to the worker as they know a government will top up that pay with tax credits, regardless of the worker’s productivity. Lowering tax credits removes that safety net for firms but in turn it also lowers the safety net for workers – which, until my students spoke up, I thought was an economically nonsensical policy.

But, think about what tax credits say to many workers. They say that whatever your productivity, however hard you work in your hours employed, whatever skills you have, you can get a certain minimum income. The reality of economics is that if you want to get a higher wage, you should increase your MRP. Take a training course, increase your skills, work out how to do your job better. But if doing that doesn’t change your income, because of tax credits, then why do it? We are, after all, dealing with humans here, and humans are generally motivated by certain incentives.

This is why, and the Tories have been terrible at explaining this, if they want a ‘high wage, low welfare’ economy, it possibly DOES make sense to raise the minimum wage (which could also force companies to invest in training workers as well as they will want them to be more productive) AND to cut tax credits (incentivizing the workers to improve their productivity so they can get paid a higher wage).

This point makes economic sense. It is difficult in this political environment to explain it, and I certainly think that raising Aid by £3.5bn by raiding the incomes of the working poor because you have ringfenced so many areas of spending whilst committing to producing a budget surplus was politically naive. BUT, it does make economic sense.

What do you think?

Would military action mean the UK would be subject to more terrorist attacks? »
« Why Paris shows that ISIS are losing and we who maintain the ‘greyzone’ are winning