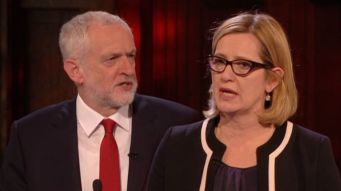 In the aftermath of her loss to Donald Trump, some commentators pointed out that Hillary Clinton might have won had she not tried to beat him at what he is best at (hurling insults) rather than insisting on taking him on where he is weakest (any discussion on actual policies).

In the aftermath of this election, whether or not Theresa May wins there will need to be a long hard look at why her campaign is floundering as much as it is. Yes, she is having to defend the compromises of Government. Yes, she is having to use the prose of reality when she is most likely to have to deliver her promises. Yes she is up against someone able to use the poetry of a vision of a ‘better world’ in which he is bribing people with other peoples’ money. But the truth is that the people who advise Theresa May decided to try and take on Jeremy Corbyn on his patch. He is simply better at it.

Iain Martin puts this very well in the Times (link here £). Martin argues that it will always be a mistake for any Tory leader to try to campaign without making the case for capitalism and markets as drivers of prosperity, without a strong argument about wealth creation and how it happens. Without doing so repeatedly through speeches and policy, Martin argues, you shouldn’t be surprised when some of the voters decide that the election is just a competition between politicians and parties “offering different sizes of magic money tree.”

The left and the right have different frames of reference on how to fix problems with social care, the NHS, infrastructure and public finances. The left believe that the State has all the answers. The right believe that all the State can do is to created the conditions for a dynamic and faster-growing economy through decluttering regulation and fixing the tax system. What Theresa May’s plans do is accept the left’s frame of reference, dividing the existing spoils between the “workers” – not growing the size of those spoils.

Which means that they are fighting on a battleground of Labour’s choosing. Witness Amber Rudd in Wednesday’s debate trying to claim that the Tories care about helping those in need. This was laughed at by the audience, because she was on stage with Jeremy Corbyn, and Caroline Lucas, and others whose actual policies match their rhetoric in a far more easily explainable way.

Theresa May might even believe that her policies will genuinely hope those most in need. But the direct government intervention she is suggesting is not something the Conservative Party will ever be trusted to do better than the Labour Party. So she shouldn’t be surprised at what is happening to the polls now once the Tories decided the choice the voters need to make is who can pick most fruit off the magic money tree and use the State best to solve all the problems.

Has Trump just planted the answer at the heart of the Death Star? »
« Why Labour Party figures need to know their figures.