What should the Brexit Party do? 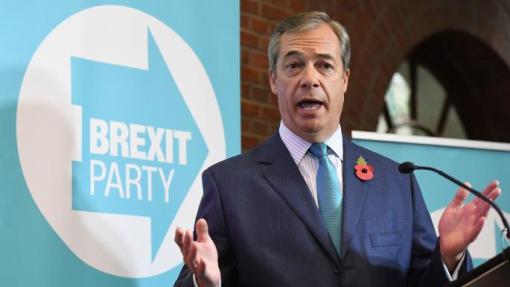 There is no easy answer for Nigel Farage and his Brexit Party in this election, because in trying to force Brexit they could achieve its end.

What happens when you create a one-trick pony but someone comes and performs three-quarters of that one trick?

Boris Johnson achieved what nobody thought he could. He not only achieved a new deal with the EU but also got it through a stage in a Parliament in which he had a minority. In the process, those people who at the EU elections voted for the Brexit Party (both from the left and the right) could see that there was someone in 10 Downing Street who was actually, genuinely prepared to do what had to be done to leave the EU.

Which leaves Farage with a problem. What does he have to offer these voters at this election? He talks about showing Westminster what happens if they don’t deliver Brexit, but it is clear that the most important person in Westminster IS focused on delivering Brexit. So what else can he do.

He has decided that Johnson’s deal isn’t Brexit, even though the ERG Spartans (the ultra-Brexit faction of the Conservative party) have voted for it. Extremely Brexity journalists have supported it as well. Even Arron Banks – Farage’s close friend and financial supporter, has said he supports the deal.

However, there ARE still voters around the country who will vote for the Brexit Party. They support whatever Nigel Farage says, for a variety of reasons. They can have a massive effect on this election, as they could decide whether or not Labour or the Conservatives win it. It all depends where they are coming from.

Under First-Past-the-Post, all a candidate, and their party has to do, is to get one more vote than the candidate in second place. Therefore, if a Brexit Party voter splits from Labour, that helps the Conservatives, and if a Brexit Party voter splits from the Conservatives, that helps Labour. No-one is entirely sure where they will come from, which is part of what makes this election so hard to predict.

As for other parts of the Brexit Party election strategy, Farage has threatened to challenge in every seat unless Johnson commits to some kind of electoral pact with him. There is little for Johnson to gain from this compared to what Farage can gain. Also, the Brexit Party campaigning in every seat wouldn’t be so bad for the Conservatives, as it would spread BP’s resources and expertise very thinly.

What the Conservatives should be more worried about is the Brexit Party focussing purely on, say, twenty seats. If they pick the right seats, they could either win them, denying the Conservatives a majority, or, more likely, both cannibalise each other’s votes so much that Labour comes through the middle and wins in those seats.

Another question has been over whether Farage might stand in a seat himself. He has said on Andrew Marr on Sunday that he won’t, and it is probably the best idea. In 2015, he stood in South Thanet, the Conservatives threw everything at it (as a recent court case led bare) and he didn’t have time to go around the country making a difference. UKIP came second in 124 seats whilst winning one seat on 13% of the votes, and Farage not being free to travel around the country was a possible reason for so many near misses.

So, if I were the Brexit Party strategist, I would focus purely on 20 seats, putting Farage in them constantly, and see if I could get a proper foothold in Parliament. 650 contests could result in 650 larger losses.

But I am not the Brexit Party strategist.

Question for Labour – who exactly is in ‘the many’? »
« Why the SNP might make all the difference